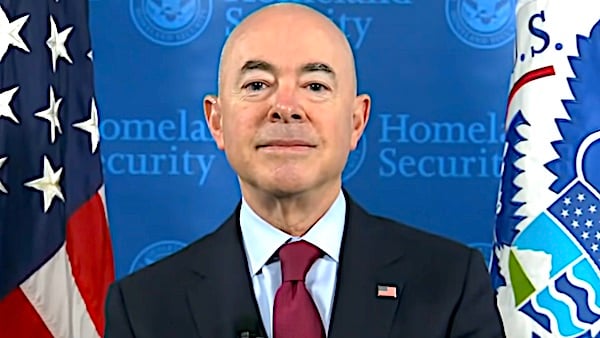 Addressing a gathering of left-wing attorneys, Department of Homeland Security Secretary Alejandro Mayorkas said his agency will make the "dignity" of foreign migrants "foremost in our efforts."

"The element of dignity [and] the rule of law. Those are two foundational guideposts as I seek to lead an agency, as we, as servants of the law, seek to bring justice in whatever we do," he said Tuesday at the 2021 national convention of the 2021 American Constitutional Society, Breitbart News reported.

"And here in the Department of Homeland Security, I think that must guide everything that we do."

Mayorkas described his "identity" as a champion for the foreigners who might want to migrate to the United States.

Breitbart's Neil Munro noted that "many millions of Americans face a loss of dignity as he extracts an endless flood of business-backed economic migrants — at their great risk — to compete for the Americans’ jobs, homes, and opportunities."

Also unmentioned, he continued, were the Americans "victimized by undeported migrant criminals or by the addictive drugs being loosed in communities by Mayorkas’ lax rules."

"He did not mention the Americans cast aside by companies eager to exploit the cheap visa workers delivered by Mayorkas’ agency. And he did not suggest any debt of gratitude towards the Americans who accepted him as a child migrant in 1960."

Mark Krikorian, director of the Center for Immigration Studies, commented that Mayorkas does not see himself as an American.

He just does not consider himself to have any greater responsibility to his own country [than to other countries] … It’s fundamentally contrary to the Constitution and to the idea of democratic governance, but it’s a consistent worldview," he said, Breitbart News reported. "It is just not one that the people running a republic have any business having."

Munro noted that courts during the Trump administration lawfully deported many economic migrants. But Mayorkas is using his parole power to nullify those rulings, helping some return to the United States:

"We are reuniting the families with the sense of urgency that that mission deserves," he said.

Art Moore
Art Moore, co-author of the best-selling book "See Something, Say Nothing," entered the media world as a PR assistant for the Seattle Mariners and a correspondent covering pro and college sports for Associated Press Radio. He reported for a Chicago-area daily newspaper and was senior news writer for Christianity Today magazine and an editor for Worldwide Newsroom before joining WND shortly after 9/11. He earned a master's degree in communications from Wheaton College.
@@arthurdmoore
Wuhan lab had 'all the genes' to make an 'epidemic' coronavirus in 2017
Quid pro quo? Biden stops military aid to Ukraine 2 days after Putin summit
Atlanta community separates from city due to crime spike
Critical space theory: NASA launches new 'equity' mission
Biden dumping illegal-alien youth across nation without notice
See more...