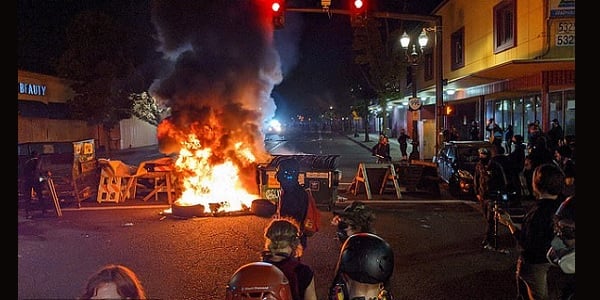 Reacting to the criminal indictment of a fellow officer, the entire Rapid Response Team of the Portland Police Bureau in Oregon has unanimously voted to disband.

The team is comprised of volunteer officers who have been responding to the riots and violent demonstrations led by Antifa and other radical groups that have plagued the Pacific Northwest city over the past year.

It was the assault charge brought against Officer Corey Budworth for actions during an August 2020 riot that prompted the team's announcement late Wednesday night, Portland's KXL radio reported.

Before the announcement, Portland Police Union Executive Director Daryl Turner told the "Lars Larson Show" the prosecution was a politically driven "witch hunt." The bureau's own investigation found the officer did not violate training or department rules and acted within the scope of the law.

Budworth was charged with hitting a protester on the head with a baton. But the police union said the strike was "accidental."

Sources confirm for me tonight that members of the Portland Police Rapid Response Team (trained in riot control) met tonight and all resigned their spots in the voluntary assignment. The news comes one day after the Antifa friendly District Attorney of Multnomah County (cont)

In a statement, the Portland Police Bureau said that despite no longer being part of the Rapid Response Team, the approximately 50 officers will continue in their daily assignment in the bureau.

"The primary role has been to provide public safety at crowd events when there was a threat of harm to the community."