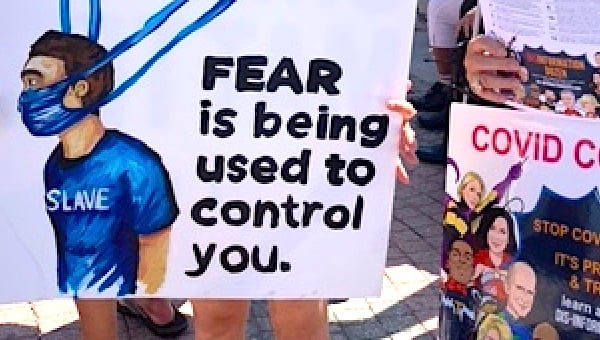 Reading through the 4,000-plus pages of Dr. Fauci’s emails – where’s the bottle of Visine? – has not been the most exciting of literary experiences, but it certainly has been revealing.

After all, Dr. Fauci was the US architect of the lockdowns that smashed all that we believed was true in the good ‘ol US of A; namely that we had rights and freedoms and a system of government that protected both. Suddenly we found ourselves housebound by law, prevented from going to concerts, movies, church, or even to the hospital if we didn’t have Covid-19 (health care spending fell 6% in 2020).

So, yes, these emails are remarkable. You want to know what this guy was thinking? How and why did he convince President Trump to shut down major parts of the economy? These emails provide hints and clues as to what he was thinking before and after. They are a major key to understanding, and investigators of all sorts will be scouring through them for years.

Whatever you do, however, don’t you dare call them a “leak” even though if Fauci had his druthers, they surely would not have been leaked; whoops, I mean released through multiple FOIA requests. The fact checkers are all over that misuse of terms, such that USA Today offers a marmish corrective to anyone who would use that term, while the Washington Post offers a mini-treatise assuring people that they do not say what you think they say.

Say it over and over until it becomes true: there are no smoking guns herein!

To paraphrase Groucho Marx, who are you gonna believe, the fact checkers or your own eyes? Most of the attention so far concerns when Fauci was warned that the virus might have been a lab leak, in a lab that received indirect US funding. What did Fauci do about such warnings and to what extent did he take them seriously?

There is so much more here than just that, even though this one concern has overshadowed everything else. A short list of what stands out to me:

I generally get the sense of a lifelong bureaucrat who implausibly found himself as the world’s most influential public-health official during the most dramatic upheaval in public policy in generations. He didn’t entirely know what to do with his new-found influence. It’s shocking to observe his complete lack of interest in the health and economic consequences of lockdown policies.

Maybe he believed they would work but it is hard to say because he was putting down the idea as late as February 25:

“You cannot avoid having infections since you cannot shut off the country from the rest of the world,” he wrote to CBS News. “Do not let the fear of the unknown...distort your evaluation of the risk of the pandemic to you relative to the risks that you face every day…do not yield to unreasonable fear.”

A few days later, he was pushing virus suppression via closures, human separation, and travel restrictions, while finding a good friend in “unreasonable fear.” Medical professionals from around the world wrote to him and begged him to stop this, that people were being bullied by cops all over the world in the name of a virus control method that could not and would not work. He read these and did not answer them.

So, yes, these emails do provide tremendous insight, despite what you are reading today from the mainstream press, which continues to defend him no matter what. Even so, the great truth cannot be forever ignored. What is that? To my mind, it is the elephant in the room: there is zero evidence that lockdowns actually worked to mitigate severe outcomes from the disease.

Even Vox has started asking the real question: “After a year of debates over mask mandates, lockdowns, and school closures, that mixed evidence might suggest a certain fatalism: Did none of these state policies really matter? Or was the virus going to spread no matter what states did? Was it all for nothing?... If you look at a list of states by their number of Covid-19 deaths per capita, it’s hard to discern much of a pattern.”

You have to dig pretty deep to get the answer here, even though myriad studies have failed to demonstrate any empirically observable relationship between lockdowns and disease control. Vox finally argues that lockdowns do work provided they happen early and hard. Vox does cite one article that examined data from March and April 2020 and hesitatingly suggests that perhaps there was a 5.4% reduction in cases due to social distancing, but only reaches that conclusion using modelled counterfactuals and very limited testing data. This study stands against some 35 others from around the world, deploying far larger data sets, showing otherwise.

Right now, Covid infections and deaths are at the lowest point in the US since March 2020. While commentators credit the vaccines, it’s not entirely obvious since low-vaccine states have the same trends as high ones. Sorting out the contribution here of natural immunity vs. vaccines is a job for high-end virologists, not journalists.

Looking at the curves of this thing here and abroad – while adjusting for climate, geography, demographics, and population immunity profiles – they all look suspiciously the same, regardless of policy.

Vox at least asks the right question: “Was it all for nothing?”

Sadly, the answer is probably yes. Get a clue, Washington Post and all the rest: this is the reason why Fauci is being hounded now. He was lockdown’s unlikely champion. It’s on him. He owns them. Now he needs to answer questions, not merely rely on his media friends to continue to give him cover.