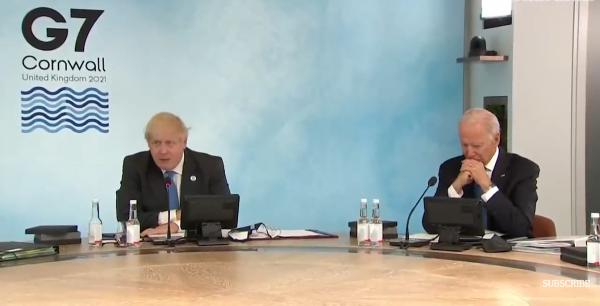 Affirming the globalist agenda of the "Great Reset of capitalism," which has been adopted by the Biden administration, British Prime Minister Boris Johnson told leaders of the G7 nations Friday that they must "build back better," remaking their economies in a "greener," "more gender neutral and perhaps a more feminine way."

Johnson said "it is vital that we don't repeat the mistakes" of the 2008 economic crisis.

"The recovery was not uniform across all parts of society," he said. "And I think what's gone wrong with this pandemic ... is that the inequalities may be entrenched."

The British leader said that as the economies of the world powers recover, "we need to make sure that we level up across our societies and we build back better."

"Build back better" was coined by the World Economic Forum – known for its annual Davos meeting of top political and business leaders – before Joe Biden adopted it as a slogan for his plan for economic recovery after the COVID-19 pandemic.

Last year, WEF founder Klaus Schwab called for exploiting the pandemic with a "Great Reset of capitalism." At WEF's virtual meeting in January featuring its Great Reset initiative, a Fortune 500 CEO affirmed WEF's assertion that "capitalism as we have known it is dead."

"This obsession we have with maximizing profits for shareholders alone has lead to incredible inequality and a planetary emergency," said Marc Benoiff, the CEO of Salesforce, which is regarded as a pioneer of cloud computing.

WEF and its allies advocate "stakeholder capitalism," meaning that rather than pursuing profits, companies would "pursue the wellbeing of all people and the entire planet."

Kerry said Biden was ready to rejoin the Paris Climate Accord, which would help drive the "Great Reset." But rejoining Paris is "not enough," Kerry said.

On Friday, the White House published a statement announcing Biden was set to meet with G7 leaders "to discuss ways to forge a more fair, sustainable, and inclusive global economy that meets the unique challenges of our time." Among the White House initiatives toward that end is pushing for a "global minimum tax" on multinational corporations of at least 15%.

.@BorisJohnson: G7 nations must build back in a “greener,” “more gender neutral and perhaps a more feminine way” pic.twitter.com/nLbYzGDk7d

WEF: Time to 'work jointly' with China for peace and prosperity

WEF's January meeting was kicked off by a speech from China's president and general secretary of the Communist Party, Xi Jinping.

See the World Economic Forum's video on taking advantage of COVID "to reshape the world in way's we couldn't before":

Schwab said in his introductory remarks that 2021 "will be the critical year to reestablish trust in our ability to shape our common future in collective and constructive ways" and to "accelerate the transition to a net-zero economy."

"In view of this objective," he said, it was his "honor" to introduce the communist leader.

Due to COVID-19, the in-person conference in the Swiss Alps was replaced by the virtual "Davos Agenda" conference followed by an in-person "Davos in Asia" summit in Singapore in May.

Schwab said that in the last four years since Xi's "historic speech in Davos 2017," the world "has become more independent and more fractured and polarized."

No doubt alluding to the global leadership of President Trump, who confronted China economically and politically, Schwab said "polarization
"has created the age of disagreement, which threatened to derail humanity."

"Now, we must come together to ensure that we capture the moment and move into the age of collaboration to build a better world," the WEF founder said.

In his remarks, Xi urged the global community to put differences aside, warning history shows countries that go it alone "will always fail."

"As we cope with the current crisis and endeavor to make a better day for everyone, we need to stand united and work together," the Chinese leader said.

"We have been shown time and again that to beggar thy neighbor, to go it alone and to slip into arrogant isolation will always fail. Let us all join hands and let multilateralism light our way toward a community with a shared future for mankind," said Xi.

After engaging in a trade war and designating China the No. 1 U.S. enemy, the Trump administration closed with declaring the communist regime is committing genocide against its Muslim Uyghur population.

Every country, industry 'must be transformed'

Introducing the "Great Reset" initiative last June, Schwab wrote that the COVID-19 lockdowns "may be gradually easing, but anxiety about the world’s social and economic prospects is only intensifying," warning a "sharp economic downturn has already begun, and we could be facing the worst depression since the 1930s."

"To achieve a better outcome, the world must act jointly and swiftly to revamp all aspects of our societies and economies, from education to social contracts and working conditions," Klaus said at the time.

"Every country, from the United States to China, must participate, and every industry, from oil and gas to tech, must be transformed. In short, we need a 'Great Reset' of capitalism," he said.

The United States, however, acheived the "V-shaped recovery" in Gross Domestic Product promised by President Trump, with a record 33.1% GDP increase in the third quarter, at an annualized rate, after a 32.8% dive in the second.

But WEF said in December the need in a post-coronavirus world for "global leaders to come together to design a common recovery path and shape the Great Reset" has never been greater.

On its "Great Reset" webpage, WEF states that as the world enters a "unique window of opportunity to shape the recovery, this initiative will offer insights to help inform all those determining the future state of global relations, the direction of national economies, the priorities of societies, the nature of business models and the management of a global commons."

"Drawing from the vision and vast expertise of the leaders engaged across the Forum’s communities, the Great Reset initiative has a set of dimensions to build a new social contract that honours the dignity of every human being."

IMPORTANT NOTE: Right now, under cover of the coronavirus pandemic, global elites including many right here in the U.S. are actively engaged in trying to usher in a completely new world system they call the "Great Reset." That's the topic of a recent issue of WND's acclaimed monthly Whistleblower magazine, titled "THE GREAT RESET: How American and global elites are leveraging COVID to socialize the world."

Dr. Anthony Fauci, the White House coronavirus adviser, has called for "radical changes" in the "infrastructures of human existence" in the wake of the coronavirus pandemic.

He made the statement in an article the scientific journal Cell.

At a conference at Yale University in October, Fauci was asked when the nation could go back to normal. He said Americans won't be wearing masks "forever" but probably would need to continue with masks and social distancing measures through 2021.

We can't just go "wherever we want," he said.

Meanwhile, Roman Catholic Archbishop Carlo Maria Viganò, a former papal ambassador to the United States, warned President Trump in October that he is "the final garrison" against the "Great Reset."

In an open letter to Trump, the archbishop said globalists are creating a "health dictatorship" to combat the virus, threatening the sovereignty of nations and religious freedom.

Cardinal Raymond Burke has called the "Great Reset" an attempt to manipulate "citizens and nations through ignorance and fear" as Marxist materialism takes hold in the United States, Newsmax reported.

Vigano wrote a letter to Trump in May 2020 warning that the COVID-19 pandemic was being used to usher in a "world government" stripping people of their freedoms. In a letter in June, he encouraged Trump in his fight against the "Deep State."