On Sunday, Vice President Kamala Harris made her first official trip abroad as a member of the Biden administration.

Her travels led her south to Guatemala, where she is supposed to be working out solutions to the "root causes" of the illegal immigration crisis at the U.S.-Mexico border.

When she descended the steps of Air Force Two, Harris was greeted by a crowd of protesters outside the airport -- many of them pro-Donald Trump activists -- flashing signs that read “Kamala Mind Your Own Business," “Kamala Go Home” and “Kamala, Trump Won." 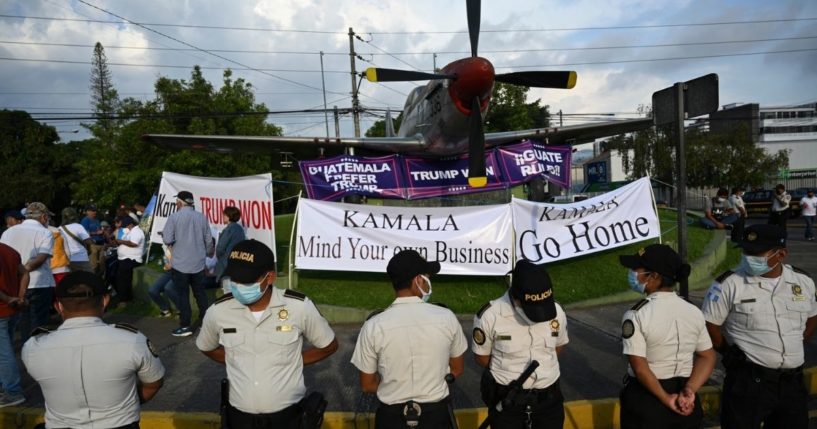 People take part in a demonstration against the visit of Vice President Kamala Harris outside the Air Force Base in Guatemala City on Sunday. (Johan Ordonez - AFP / Getty Images)

Given the Biden administration’s coddling of illegal immigrants and its willingness to funnel cash to any country that claims need, you would have expected Harris to have be met with pro-illegal immigration signs and fawning pro-Biden activists.

So why wasn’t she?

As a group called Society in Action, which protested outside the airport, told El Faro, a Central American newspaper based in El Salvador, “We’re not against Kamala Harris’s diplomatic visit, but rather her interference and blackmail in return for aid.”

One of the demonstrators continued: “We’re against [the Biden administration's] agenda of imposing the LGBTQ, pro-abortion ideology. In Guatemala we’re pro-life.”

“We're against their (the Biden administration's) agenda of imposing the LGBTQ, pro-abortion ideology. In Guatemala we're pro-life," one member of the group told @_elfaro_'s photojournalist @victorpena84. pic.twitter.com/3UzF2s60En

As it turns out, about 87 percent of the Guatemalan population was Christian in 2016, according to polling cited by the U.S. State Department.

Christians believe in the inherent value of human life. We know that all humans are created in the image of God and endowed with the right to life, liberty and the pursuit of happiness.

It follows that a country of Christians wouldn’t be on board with a woman’s "right" to choose to kill a baby in the womb.

With regard to the bribery being sold as humanitarian aid, it seems that many Guatemalans just want equality of opportunity, individual freedom and to be left alone by Democrats -- which makes them like many Americans.

But, furthermore, why would a country whose residents believe in the intrinsic value of human life and individual freedom buy into the Biden administration’s militantly anti-scientific, anti-freedom LGBT agenda?

There is something to be said for tolerance of people who don’t seem to fit in neatly with everyone else.

But that is different from ignoring the biological markers between male and female to instead effectively mandate that sex is determined by features of the personality -- and then cracking down on individual and religious freedom based on this anti-scientific nonsense.

If the Biden administration had its druthers, religious Americans would no doubt be forced to participate in activities they believe to be sinful. Schools would be teaching children anti-scientific garbage about pregnant men and “people with vulvas.”

Free citizens with an innate penchant for mouthing off at authority would be compelled by their government to use certain pronouns in relation to others.

In the same way that France wants leftism to stay in American universities, many Guatemalan people would prefer that “woke-ism” remain an American problem.

And the truth is that the spread of ideological leftism does need to be confined to the United States, where it should be defeated.

This all leaves a final question: Why is the vice president of the United States in Guatemala instead of at the U.S. southern border, where the crisis is occurring and Americans are hurting because of it?

The answer is that the Biden administration has painted itself into a corner.

The best solutions to the illegal immigration crisis happen to be fortifying the border, prosecuting and deporting illegal immigrants, and removing incentives for criminal border crossings.

These are all Trump administration solutions that would work to solve the problem, but they fly in the face of the Biden agenda, which is to be anti-Trump.

Democrats have decided instead that the “root cause” of illegal immigration to the United States is that America is just too good relative to the rest of the world.

If we invested taxpayer dollars in humanitarian aid, then people of other countries wouldn’t feel the need to come to America anymore because their country would be as good or better, the thinking goes.

The problem is that this thinking is stupid.

It also happens to be dangerous because it requires us to beef up the rest of the world and cut ourselves down to size.

In an effort to pretend that the illegal immigration crisis is caused by factors other than Biden administration policy, this line of thought has sent Kamala Harris to other countries to investigate and report back about how bad they have it relative to us.

Her solution to our own problems, then, will always be to solve the problems of everyone else -- to make all things equitable.

This is a load of bunk.

The Guatemalans know it as much as we do.

Kevin Catapano, The Western Journal
City of Billings responds after reports of explosions over Montana
Couple hear 'cats' screaming in the woods, find something entirely unexpected instead
Murdered GOP lawmaker was shot 7 times in the head
George Soros finally given the perfect title
Man shows his electric car lost 70% of its acceleration ability in the cold
See more...