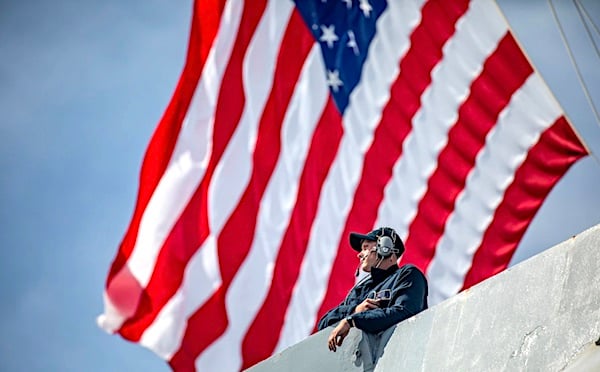 The mayor of a small town in Colorado unilaterally removed the Pledge of Allegiance from the town board's agenda for all future meetings, claiming the move was required because of the divisiveness it creates.

But then he didn't explain what that was.

Instead, Silverton, Colorado, mayor Shane Fuhrman said, "Due to direct and indirect threats, inappropriate comments in and out of public meetings, and the general divisiveness this is creating in our community, we will not be doing the Pledge of Allegiance during town of Silverton board of trustee meetings."

His dictate immediately was challenged by town trustee Molly Barela, who pointed out the board had discussed the feature, and had decided to include it, but Fuhrman told her to find a code provision that did not allow him to take his action – and then it could be discussed.

Later in the meeting, a member of the audience got up during the public comment period and recited it, to which Furhman then said it was out of order and if it happened again, he would order audience members removed from the public meeting.

A CBS affiliate in Colorado pointed out that the mayor "tries" to suspend the Pledge.

Fox reported Barela also had a warning for the mayor:

"To tell members of the public they are not allowed to say the Pledge of Allegiance during public comment and threaten to have them removed that it was one strike and you’re out policy violates every single one of their First Amendment rights," she said.

Silverton has a few hundred residents and is in the San Juan Mountains.

Barela told KDVR television in Denver, "Back in April 2020 when the newest board members were seated the mayor brought it up that he didn’t want to do the Pledge of Allegiance anymore because it’s not really a thing, it was a 4-3 vote that we continue to do it.

"Now that we’ve gone back to in person meetings members of the general population, especially those who are veterans, have been questioning why would you run for office and take an oath to uphold the laws of the United States of America the state of Colorado, and the town of Silverton if you won’t stand for the Pledge."

Fuhrman's stunt pulled in the attention of U.S. Rep. Lauren Boebert, R-Colo., who said on social media: "It’s hard to put into words what kind of anti-American disgrace this is. Mayor Fuhrman should resign and purchase a one-way ticket to China where he won’t have worry about hearing the pledge!"

It’s hard to put into words what kind of anti-American disgrace this is.

Mayor Fuhrman should resign and purchase a one-way ticket to China where he won’t have worry about hearing the pledge! pic.twitter.com/tjzU1cnOv0