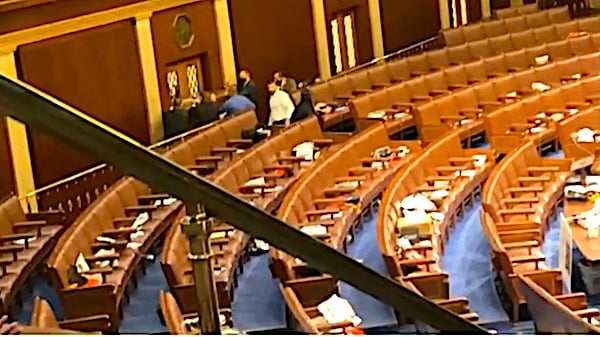 A prominent senator is demanding information from U.S. Capitol Police about how some "300 people" gained unauthorized access to the Capitol through a single doorway during the events of January 6.

That's when protesters went to the building, entered – sometimes through broken windows – and vandalized it.

Democrats and legacy media outlets repeatedly have blamed President Trump, who held a rally earlier that day and told his supporters to protest the presidential election in 2020 – with its suspicious events – "peacefully."

Democrats even used the events of that day to stage their second, failed, impeach-and-remove strategy against President Trump, adopting an article of impeachment without testimony or evidence.

Now Just the News is reporting a demand from Sen. Ron Johnson, R-Wis., that officials give him information about a security footage video that he reviewed.

He's the top Republican on the Senate Permanent Subcommittee on Investigations, and wrote to U.S. Capitol Police Acting Chief Yogananda Pittman this week.

He explains video footage of the Jan. 6 riot reveals more than 300 people entered the building through a single doorway. He now wants answers from police officers who were nearby.

Authorities have estimate that about 800 people without permission entered the building that day. The 309 people who came through that single doorway would make up more than one-third of the total.

The circumstances are suspicious, the senator said:

"At approximately 2:26 p.m. on January 6, a security camera showed a male inside the Capitol attempting to open one of the upper west terrace doors to exit the building. This unauthorized individual, who was by himself at the time, walked through a narrow hallway to the double doors and attempted to exit through the left door by pushing the door's crash bar. The door did not open and the individual turned around and walked back through the hallway and away from the doors.

He continued, "Does USCP know why at approximately 2:26 p.m. an individual could not open the left door at the upper west terrace entrance, but seven minutes later, at 2:33 p.m., another individual could open that same door? Does USCP have any indication that this door was locked at 2:26 p.m. and then unlocked by 2:33 p.m.?"

Johnson noted in the letter it took only about 14 minutes for "approximately 309 unauthorized individuals" to gain access through that door.

The senator noted officers apparently had formed a line across the hallway to block people from entering. But several people "pushed past the officers" and that the officers "did not appear to take any further action to stop or block people entering the building until a few minutes later."

The officers ultimately "appeared to slowly retreat from the doorway, allowing a surge of people to, once again, enter the building."