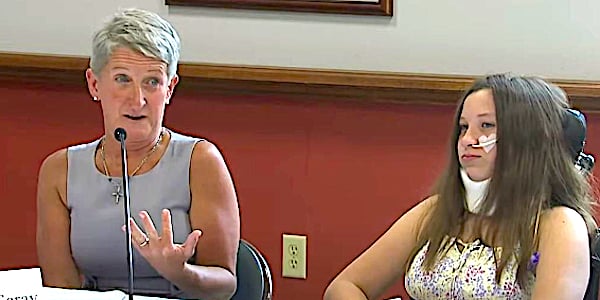 Stephanie de Garay of Ohio testifies June 28, 2021, at a news conference in Milwaukee hosted by Sen. Ron Johnson, R-Wis., of the devastating effect of the Pfizer COVID-19 vaccine on her 12-year-old daughter (Video screenshot)

A mother in Milwaukee at a news conference hosted by Sen. Ron Johnson, R-Wis., broke down crying as she told how her active and healthy 12-year-old daughter had become wheelchair-bound after participating in a COVID-19 vaccine trial.

Stephanie de Garay of Ohio, said Monday her daughter, Maddie de Garay, received a second dose of the Pfizer vaccine on Jan. 20 as a participant in the clinical trial for 12-15 year-olds. She said all three children participated in the trial and were excited to do it as a way of helping everyone "return to normal."

De Garay said she and her husband are "pro-vaccine and pro-science," which is why they were enthusiastic about participating in the trials.

But immediately after receiving the shot, Maddie felt pain at the injection site and over the next 24 hours developed severe abdominal and chest pain. Maddie told her mother the chest pain "feels like my heart is being ripped out through my neck."

"Why is she not back to normal?" Stephanie de Garay asked.  "She was totally fine before this. She did the right in trying to help everyone else and they’re not helping here."

Maddie has been taken to the emergency room nine times and has been hospitalized three times.

"All we want is for Maddie to be seen, heard, and believed because she has not been. And we want her to get the care that she desperately needs, so she can go back to normal," said Stephanie de Garay.

The COVID vaccines, which have not been approved by the FDA, are being administered under Emergency Use Authorization. The trials for the Pfizer-BioNTech coronavirus vaccine are scheduled to run for another year and a half. The estimated completion date is Jan. 31, 2023.

Last week, the World Health Organization said in an update on its website that "more evidence" is needed before it can "make general recommendations on vaccinating children against COVID-19."

The WHO argued that children and adolescents "tend to have milder disease compared to adults, so unless they are part of a group at higher risk of severe COVID-19, it is less urgent to vaccinate them than older people, those with chronic health conditions and health workers."

Also, the Centers for Disease Control and Prevention last week admitted it was finding more cases of a rare heart inflammation than expected in young adults who took the COVID vaccine.

Another testimony at the news conference Monday came from Kristi Dobbs, a dental hygienist from Missouri who said she has suffered pain, paresthesia and heart palpitations from her COVID shot.

"It feels like you’ve got a little electronic shock running through your body, like your stuck in a vibrating chair, like glued into it, and it never stops. I have tremors in my hands which has made me leary if I’ll ever be able to practice as a hygienist again," Dobbs said.

She is "fearful that I may have a neurological issue after this, like Parkinson's."

Brianne Dressen, a preschool teacher from Utah who volunteered for the Astra Zeneca vaccine trial, said she and the others there "are the collateral damage of the pandemic."

"As you can see, I am recovering. I can walk, the touch of my little son’s hand no longer feels like it’s setting me on fire," she said.

Dobbs thanked Johnson for the opportunity to be "seen and heard," but she said that she and the other families that have suffered "need to be believed."

"We just want you guys to believe that this is real. We are real Americans. We are real people experiencing these side effects," she said.

At the news conference, Johnson distributed documents based on the government's Vaccine Adverse Event Reporting System, or VAERS, which he says included 384,270 adverse events related to the COVID-19 vaccines. Among them were 4,812 deaths. This database includes unverified reports from doctors and the public, which the CDC says may be "incomplete, inaccurate, coincidental, or unverifiable."

Johnson said the vaccines are generally safe, but he told FOX6 in Milwaukee he believes "the American public should be able to have informed consent when deciding whether or not to take an experimental vaccine, one way or the other."

Johnson himself has not been vaccinated, saying he has the antibodies.

Johnson said he hasn't decided whether or not to seek a third term. But having a podium to speak out on issues like the vaccine is a factor, he said.

"If no one else is willing to step out there and talk about unpopular truths, that would be one of the considerations."

Last week, the inventor of the mRNA technology behind the COVID-19 vaccines warned that Americans don't have enough information to decide whether or not the benefits of getting the shots outweigh the risks.

Dr. Robert Malone  – after YouTube deleted a video interview of him discussing the risks of COVID-19 shots – told Fox News' Tucker Carlson he was concerned that the government is not being transparent.

"I am of the opinion that people have the right to decide whether to accept vaccines or not, especially since these are experimental vaccines," Malone said Wednesday night.

He said regarding younger Americans that he "has a bias that the benefits probably don't outweigh the risks in that cohort."

He emphasized that there is no substantive risk-benefit analysis being applied to the vaccines.

"That is one of my other objections, that we talk about these words risk-benefit analysis casually as if it is very deep science. It's not. Normally at this stage, the CDC would have performed those risk-benefit analyses and they would be database and science-based. They are not right now," said Malone.

Meanwhile, a Canadian surgeon who called for pausing the COVID-19 vaccinations for children has been suspended from the University of Saskatchewan College of Medicine and fired by the Saskatchewan Health Authority.

Emphasizing the need for "informed consent," Dr. Francis Christian said that at a minimum, parents and children should be made aware of eight points of concern. Among them is that mRNA is an experimental vaccine design with only "interim authorization" in Canada and that "COVID-19 does not pose a threat to our kids."

Last Wednesday, the FDA said it will add a warning to Pfizer and Moderna vaccines after a CDC advisory panel pointed to data showing a "likely association" between the vaccines and rare cases of heart inflammation in adolescents and young adults, CBS News reported.

Israeli researchers said June 21 that the Pfizer coronavirus vaccine has been linked to an increased chance of developing thrombotic thrombocytopenic purpura, a rare blood disorder, the Jerusalem Post reported.