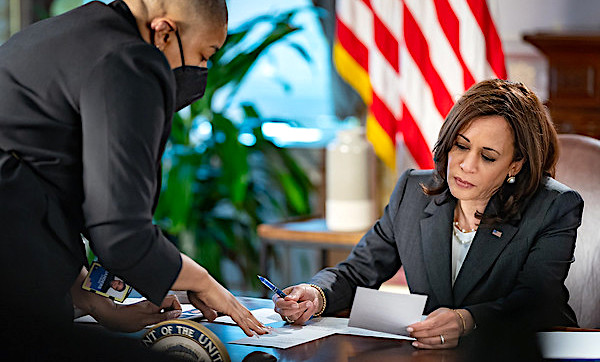 Vice President Kamala Harris told Guatemalans considering journeying to the U.S. not to come during a press conference with Guatemalan President Alejandro Giammattei on Monday.

Harris asked Guatemalans to discourage their friends and family members from making the trip because only coyotes benefit from the journey. She said U.S. officials will be enforcing laws to secure the border and that people should look to migrate through legal channels.

“The goal of our work is to help Guatemalans find hope at home,” Harris said. “At the same time, I want to be clear to folks in this region who are thinking about making that dangerous trek to the United States – Mexico border, do not come, do not come.”

“There are legal methods by which migration can and should occur, but we as one of our priorities will discourage illegal migration and I believe that if you come to our border you will be turned back,” Harris said.

Harris said most people don’t want to leave their homes, family members or culture, but are fleeing harm or because they’re unable to provide for their families. She added that the U.S. is working with Guatemalan officials to provide a sense of hope.

Guatemala is working on a process to allow people the chance to regularly migrate to the U.S. through visas, Giammattei said during the press conference. Officials will establish a return center in the western part of the country to help control the flow of migrants at the United States’ southern border and will increase efforts to reunite separated families.

U.S. Customs and Border Protection officials encountered over 178,000 migrants at the southern border in April including more than 17,000 unaccompanied minors, according to the agency.

The U.S. will focus on providing aid to three main areas including security, economic development and anti-corruption, Harris said. A joint task force will work with local law enforcement to target human and drug smuggling within the country.

Economic development aid is focused on the root causes of migration and a lack of economic opportunity in Guatemala, Harris said. The U.S. will invest in agribusiness, housing and getting private sector companies to allocate resources and create jobs in the country.

The U.S. will form a task force to investigate and train local law enforcement to target transnational crime with a focus on anti-corruption efforts, according to Harris.

The U.S. will provide Guatemala with 500,000 COVID-19 vaccines, Harris said. Officials have administered nearly 600,000 doses of the vaccine meaning about 2% of the country’s population has been vaccinated, Reuters reported Monday.