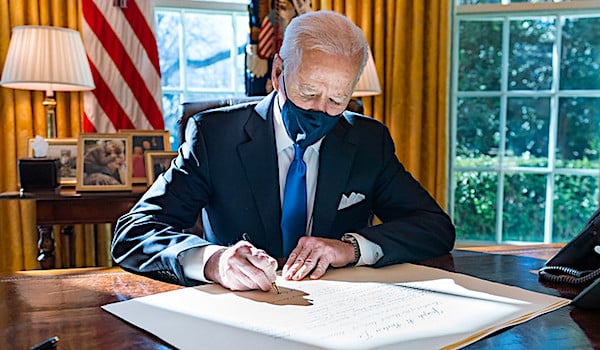 More than 310,000 – and counting – people have signed a petition seeking an investigation into the allegations of Biden family crimes.

Judicial Watch chief Tom Fitton said there's lots of evidence, and substantial evidence at that, in the case.

He noted Hunter Biden already is "on to his next corrupt enterprise — secretly selling his 'ink blow' paintings, in a scheme concocted by the Biden White House."

Legal scholar Jonathan Turley, who weighs in regularly on the daily news on his website, has said that there are a number of incidents involving the mass transfers of money to Hunter Biden and his uncle, Jim Biden, that are of interest.

Individuals involved in such situations include, he said, Patrick Ho, secretary general of Chinese oil giant CEFC, who was later indicted and has been connected with Chinese intelligence.

A former Hunter Biden business partner in the CEFC deal, Tony Bobulinski, has claimed he met twice with Joe Biden to discuss the firm, which has ties to the Communist Party, and "what I was doing with his family's name." Bobulinski said it was clear that the former vice president was in charge of the family business enterprise trading off his status.

Turley noted that the young Chinese assistant supplied to Hunter, JiaQi Bao, made revealing statements about the fluid expense accounts and level of support given Hunter by the Chinese.

Hunter Biden announced the Justice Department investigation of his "tax affairs" on Dec. 9, 2020, in a statement issued by the Biden-Harris transition team.

His father said through an aide at the time: "President-elect Biden is deeply proud of his son, who has fought through difficult challenges, including the vicious personal attacks of recent months, only to emerge stronger."

The previous evening, WND reported two Republican-led Senate committees concluded that members of Joe Biden's family engaged in deals with Chinese nationals who had "deep connections" to the Communist Party.

The Washington Examiner previously revealed how Hunter Biden got some pointed questions from a business associate when that associate was arrested in a fraud case.

Hunter Biden's name apparently was used in the alleged fraud, but he wasn't charged.

One of the more stunning business coups was Hunter Biden's program of getting paychecks from Burisma while his father was vice president and in charge of Ukraine policy for Obama.

Bob Unruh
Bob Unruh joined WND in 2006 after nearly three decades with the Associated Press, as well as several Upper Midwest newspapers, where he covered everything from legislative battles and sports to tornadoes and homicidal survivalists. He is also a photographer whose scenic work has been used commercially.
See for yourself what YouTube insists is misinformation from Trump
Biden bizarrely claims 8.5% inflation actually is 'a number: zero'
'When you jail your political opponents, it's easy to stay in office'
'Slap in the face': Pro-life Americans urged to boycott this major retailer
Oops! Jan. 6 committee backfiring in spectacular way on Democrats
See more...