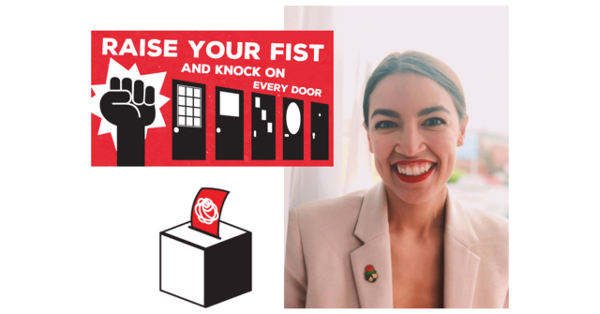 Screen capture from website of Democratic Socialists of America

U.S. Rep. Alexandria Ocasio-Cortez, D-N.Y., and three other House Democrats are affiliated with a far-left group called Democratic Socialists of America, which is backing Cuba's communist regime amid a popular uprising.

DSA members Ocasio-Cortez and Reps. Rashida Tlaib, D-Mich., Jamaal Bowman, D-N.Y., and Cori Bush have not spoken out on the protests that took place in cities across the island nation on Sunday.

Meanwhile, the DSA International Committee on Monday declared solidarity "in this moment of unrest" with the "Revolution," the term the regime has used since Fidel Castro came to power in 1959, Fox News reported.

The DSA International Committee says its "mission is to help DSA and its membership to connect in solidarity with like-minded activists, workers, movements, and parties worldwide."

The DSA is the largest socialist organization in the United States. It's regarded as the U.S. affiliate of Socialist International, the worldwide organization of social democratic, socialist and labor parties.

The DSA features a photo of Ocasio-Cortez on its homepage next to the socialist fist symbol. Below her image, in a section titled "Strong Labor Movement," the DSA states its opposition to capitalism.

"Capitalism pits us against each other and workplaces are fundamentally authoritarian unless workers can self-organize and build collective power," the website says. "This is why people build unions, and why employers undermine them. It is also why the capitalists as a class constantly promote narratives about unions that frame them as unnecessary, undemocratic, or ineffective. We know better, and we’re building worker power in every region of the country."

In the column across from the photo of Ocasio-Cortez is a section titled "Electoral Strategy" that mentions Sen. Bernie Sanders, a self-described democratic socialist who has praised Fidel Castro for some of his social programs.

"Bernie Sanders launched a political revolution and DSA continues to build it, training our chapters to effectively support democratic socialist candidates running for local and state office while lifting up our key issues," the DSA site says. "We’re also grappling with how to build independent political power to hold elected officials accountable to their constituents rather than the donor class."

"Capitalism is a system designed by the owning class to exploit the rest of us for their own profit. We must replace it with democratic socialism, a system where ordinary people have a real voice in our workplaces, neighborhoods, and society," the site says.

The DSA works inside the Democratic Party and has cross membership with the Communist Party USA, Committees of Correspondence for Democracy and Socialism, Socialist Party USA and the Green Party USA, WND reported in 2015.

Top DSA members have been closely linked to former President Obama. And Obama himself spoke at a forum organized by the group at the University of Chicago in early 1996 called "Employment and Survival in Urban America," WND reported.