People fleeing communist tyranny in Cuba – even if they demonstrate fear of persecution – and political unrest in Haiti will not be given refuge in the United States, warned Homeland Security Secretary Alejandro Mayorkas.

"Allow me to be clear: if you take to the sea, you will not come to the United States," he said Tuesday.

Mayorkas, who fled Cuba with his family in 1960, spotlighted the dangers of traversing the Caribbean Sea and the Florida Straits by boat. 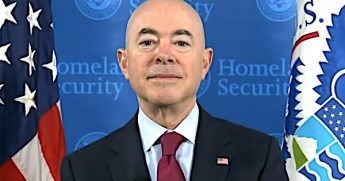 Over the weekend, protesters took to the streets across Cuba in the biggest public demonstrations in nearly three decades. The impoverished nation of Haiti has been rocked by the assassination of President Jovenel Moise.

Mayorkas said anyone who reaches the U.S. by sea will be intercepted by the Coast Guard and immediately returned.

"If individuals make, establish a well-founded fear of persecution or torture, they are referred to third countries for resettlement," Mayorkas said. "They will not enter the United States."

Should Cubans and Haitians be allowed into the U.S.if they're fleeing communism and persecution?
92% (157 Votes)
8% (14 Votes)

DHS Secretary Mayorkas had a message for Cuban refugees fleeing communist tyranny: "If you take to the sea, you will not come to the United States." pic.twitter.com/wHumF2NeuR

Critics charged the Biden administration with hypocrisy, noting asylum-seekers are being let in the Southern border who come from Central American countries that don't fit the definition of systemic oppression, as does Cuba.

The U.S. had a "wet feet, dry feet policy" in which any Cuban caught at sea between the two nations would be returned to Cuba or sent to a third country. Anyone who set foot on the shore was allowed to remain. The policy was discontinued under President Obama. Prior to 1995, anyone who reached U.S. territorial waters was allowed to remain in the country.

Sen. Ted Cruz, R-Texas, who father fled Cuba, was asked Wednesday by Fox News' John Roberts to react to Mayorkas' remarks, noting the "contradictory messaging" between policies for the Southern border and for Cubans.

"It seems that for Joe Biden and Kamala Harris the only immigrants on the face of the earth that they don't want to come to America are Cuban," he said. "That's the only instance in which the Biden administration is expressing a resistance to people coming here illegally."

In Texas, Cruz said, the federal government essentially has opened the border.

The senator said Biden needs to declare the communist dictatorship in Cuba is "evil, it is oppressive; they are murderers, they are torturers, and the people want freedom."

"Unfortunately, the Biden administration has been lukewarm at best on that simple and clear messaging," he said.

WATCH: @tedcruz reacts to the fourth day of anti-government protests in Cuba and DHS Secretary Mayorkas' message to those who might be considering the journey to the U.S. #AmericaReports pic.twitter.com/MpneXLspNI