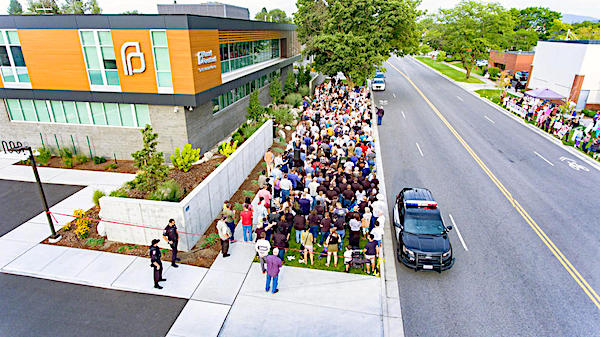 A pro-life church that assembles outside a Planned Parenthood in Spokane, Washington, is the most recent target of a lawsuit by the abortion facility.

On July 2, Planned Parenthood of Greater Washington and Northern Idaho requested a permanent injunction against The Church at Planned Parenthood, a pro-life Christian worship service that meets regularly outside the abortion facility. The abortionists claim that the noise of church activities interferes with patient care. According to a press release on the facility’s Facebook page, the noise could cause “increased risk of hypertension, increased pain, and a variety of psychiatric symptoms” in abortion clients.

The statement also described the church services as “armed protests” and claimed several members of the church were “inciting violence.”

“These are not protesters – they are bullies who are trying to take away care from young women,” said Karl Eastlund, CEO of Planned Parenthood of Greater Washington and North Idaho, according to The Christian Post.

But the church rejects the abortion giant’s characterization of its activities. “The Church at Planned Parenthood is NOT a protest. It’s a worship service at the gates of Hell,” reads the church’s website. “The Church at Planned Parenthood is a gathering of Christians for the worship of God and the corporate prayer for repentance for this nation, repentance for the apathetic church, and repentance of our blood-guiltiness in this abortion holocaust.”

In September of 2020, a judge sided with Planned Parenthood, granting a preliminary injunction against the church. However, the abortion facility complains that the preliminary injunction did not give local police the authority to enforce violations. Instead, police have been monitoring for violations of existing laws against disturbing the peace, but have not found or cited any violations in the way the church conducts its services. While Planned Parenthood calls these services “armed protests,” there is no mention anywhere that any of the church members are actually armed.

“The Spokane Police Department and the City’s Code Enforcement Department attended the scheduled event last night, as is regular practice, to monitor behavior and noise levels. The noise before and during the event, which was monitored by decibel meters, did not reach a level that required enforcement action per ordinance. Additionally, officers did not receive noise complaints from anyone in the area,” said Brian Coddington, spokesman for the city of Spokane, according to KREM.

The latest court filing seeks a permanent injunction that would inhibit the church from assembling outside of the abortion facility. Planned Parenthood posits that the church’s gatherings violate Washington state law against “interfering with a health care facility” by people who “willfully or recklessly interfere with access to or from a health care facility or willfully or recklessly disrupt the normal functioning of such facility.”

“Planned Parenthood is not worried about patient care. We have service once a month, in the evening after their business hours. They seek to silence our message,” said Pastor Ken Peters in an interview with The Christian Post.

“We feel confident in the evidence provided at today’s hearing as we await the court’s decision for a permanent injunction and remain committed to caring for patients seeking access to reproductive health care,” Planned Parenthood spokesman Paul Dillon said, according to KREM.

Pastor Ken Peters founded the church in 2019 as a way to bring his faith into action in service of the pro-life movement. Live Action News quoted Peters as saying, “We have a holocaust going on in our own country, and this really brings it to light, and we’re confronting it with the Holy Spirit and with worship instead of in the flesh.”