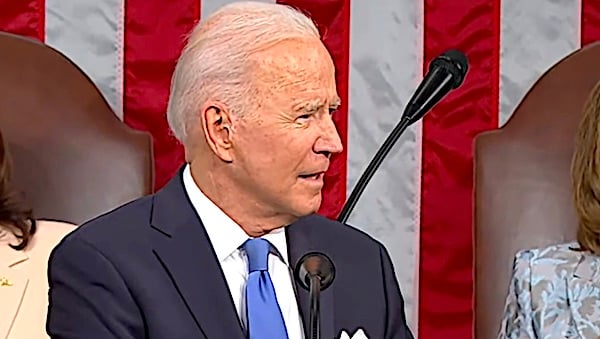 Two suburban women ordered to remove anti-President Joe Biden signage from their front yard for including expletives in them will be represented by the New Jersey chapter of the American Civil Liberties Union (ACLU), NJ Advance Media reported on Monday.

Homeowner Patricia Dilascio was ordered by Roselle Park Municipal Court Judge Gary Bundy to take down anti-Biden signs she had put up with her daughter, Andrea Dick, for violating a borough ordinance prohibiting obscenities, according to NJ Advance Media.

The signs included lines like “Fuck Biden and fuck you for voting for him” and “Fuck Biden, not my president,” Law & Crime reported. They face fines of $250 per day for not taking them down.

The local ordinance prohibits “any obscene material, communication or performance or other article or item which is obscene within the Borough.” The pair are now represented by ACLU attorney Alexander Shalom, who is appealing to the Superior Court in Union County, NJ Advance Media reported.

“All New Jerseyans have the right to express themselves freely under the First Amendment,” ACLU of NJ Legal Director Jeanne LoCicero told NJ Advance Media. “Roselle Park’s ordinance against posting obscene signs should never have been applied to political signs.”

In his ruling, Bundy said the case was about language, not politics. “This ordinance does not restrict political speech. Neither this town or its laws may abridge or eliminate Ms. Dilascio’s freedom of speech,” he wrote in the opinion, Law & Crime reported.

“However, freedom of speech is not simply an absolute right. It is clear from state law and statutes that we cannot simply put up the umbrella of the First Amendment and say everything and anything is protected speech,” he added.

“I think the judge got it right,” Jarrid Kantor, the borough’s attorney who argued the case in municipal court, told NJ Advance Media. “I think he upheld the ordinance as written. The ordinance itself survives constitutional scrutiny…”

Dilascio and Dick have refused to abide by the ruling, deeming it to be unconstitutional, with Dick telling NJ Advance Media she is willing to take the case all the way to the state Supreme Court. “I feel like my First Amendment right is being stripped from me,” she said.

The U.S. Supreme Court set a precedent in 1971’s Cohen v. California that favors the ACLU’s position. The court ruled in favor of a man protesting the Vietnam War with a jacket reading “F*** THE DRAFT. STOP THE WAR,” finding the government could not regulate an individual’s right to express vulgarity to protect public morality, Law & Crime reported.