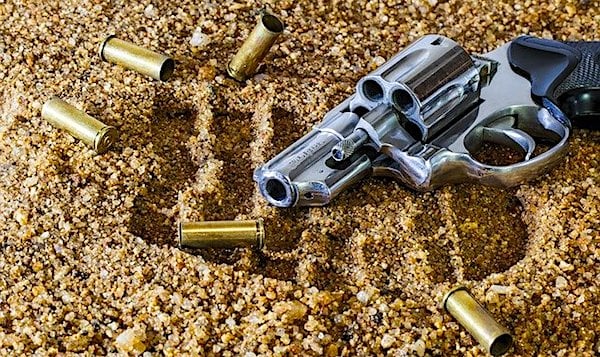 President Biden often has blurted out unwise statements. He once suggested all one would need for self-defense is a shotgun, which could be fired twice to warn off an attacker.

That statement might technically be correct, if an attacker would be intimidated, but it also would leave the person firing the shots then unarmed, as shotguns mostly hold only two shots.

Now he's revealed, possibly inadvertently, that his real goal is to ban handguns – and likely anything else that fires a shot.

That's according to officials with the Citizens Committee for the Right to Keep and Bear Arms, who noted Biden's statements at this week's town hall appearance on television.

Biden was responding to a question from the audience in which he stated, "The idea you need a weapon that can have the ability to fire 20, 30, 40, 50, 120 shots from that weapon, whether it's a, whether it's a 9mm pistol or whether it's a rifle, is ridiculous. I'm continuing to push to eliminate the sale of those things, but I'm not likely to get that done in the near term."

The president "acknowledged in a Freudian slip he really does want to ban handguns," explained CCRKBA Chairman Alan Gottlieb. "The real Joe Biden is finally out of the bag, despite the media’s continued efforts to soft-peddle his extremism."

He explained, "The nation has been in trouble since Biden took the oath of office. The Constitution is in jeopardy. Joe Biden should be impeached for advocating the shredding of our Bill of Rights."

He noted handguns are specifically protected by the Second Amendment, thanks to the Supreme Court's 2008 Heller ruling. He said Biden's remark about banning 9mm pistols was "certainly unintentional, but does reveal his ultimate goal."

"People often reveal their true feelings when they blurt things out in the heat of a moment," he observed.

"Joe Biden’s spinmeisters in the White House and the establishment media will not be able to walk this back. That horse has left the barn and no amount of clarification or obfuscation is going to clean up his mess. Biden’s only mistake was that he accidentally told the truth about his intentions, and CNN broadcast it live. By his own words, he has confirmed everything we have warned about for months."

"It’s taken Joe Biden six short months to foul up the economy, reverse this country’s energy independence causing fuel prices to soar, declare war on free speech and now he has acknowledged in a Freudian slip he really does want to ban handguns," said. "The real Joe Biden is finally out of the bag, despite the media’s continued efforts to soft-peddle his extremism."

The Epoch Times noted that Biden took to bragging about his anti-gun activism.

"I’m the only guy that ever got passed legislation when I was a senator to make sure we eliminated assault weapons," he said.

He likely was referring to the 1994 Violent Crime Control and Law Enforcement Act.

But the report noted, "It’s not clear whether Biden meant he wants to ban 9mm pistols or rifles outright or magazines that hold a minimum of 20 rounds. Many firearms have the capacity to use magazines that have fewer than 20 rounds, and in states like California or New York, state law prohibits owning magazines with more than 10 rounds. The 9mm round is also one of the most commonly used rounds in the United States."

Biden already has pushed for laws that target certain types of rifles, and he has used his executive power to order the Department of Justice and the Bureau of Alcohol, Tobacco, Firearms and Explosives to impose additional regulations on AR-15-style pistols with stabilizing braces.