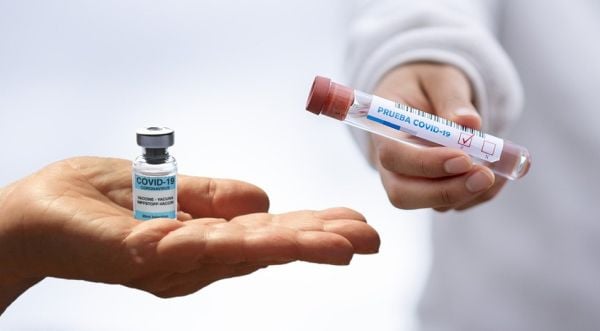 President Biden so desperately wants the vaccine-hesitant part of the country to get their shots that he may have spread a little misinformation. “You are not going to get COVID,” he promised during a CNN town-event Wednesday night, “if you have these vaccines.”

The fact that fully vaccinated individuals can still contract the coronavirus is a medical reality. It has also led to more uncomfortable questions about transparency for the Biden administration.

Reporters pressed her on the issue. After all, as the country learned the hard way during the pandemic, the health of the people working directly for the president can end up influencing the health of the republic. A lot of people have those jobs, more than 2,000 in the White House itself and the adjacent Eisenhower Executive Office Building. According to Psaki, that means “that just statistically speaking, there will be people who are vaccinated individuals who get COVID on the campus.”

Will the White House make those statistics available as they develop? “No,” Psaki said. “I don't think you can expect that we're going to be providing numbers of breakthrough cases.”

Well, why not? The story of the pandemic has been told through the charts and graphs presented to the public by members of the White House COVID task force. Why should this data be exempt?

When Kelly O'Donnell of NBC News pressed the White House to explain the lack of transparency, Psaki responded by saying that things are different now: “Well, Kelly, I think, one, we're in a very different place than we were several months ago. The vast, vast, vast majority of individuals who are vaccinated who get COVID will be asymptomatic or have mild cases.”

Psaki continued by saying that everyone who clocks in and out at the White House campus “has been offered a vaccine.” But those administration employees, like the rest of the federal workforce, have not been required to roll up their sleeves and take the shot. Face coverings have disappeared all the same at the White House, and aides are expected to follow the rule Biden laid out in May: “Get vaccinated or wear a mask until you do.”

But since even vaccinated individuals can become infected with the virus, what happens in those cases? “We have been very clear that we will be transparent with anyone who has had close proximity contact with the president or any of the four principles as deemed by the White House medical unit with all of you,” Psaki said.

And if someone sick with COVID comes into close contact with those principles, the press secretary said that the case itself would be made public but the infected individual would decide whether or not his or her name would be released. She promised, “We will protect their privacy.”

White House staff were made aware of this policy in a campus-wide email sent recently, and Psaki said Tuesday that the White House was abiding by “an agreement we made during the transition to be transparent and make information available.” They had committed then, she insisted, to releasing “information proactively if it is commissioned officers.”

The White House did not provide a copy of that commitment to transparency when asked to do so by RealClearPolitics.

It is a touchy subject. On one hand, the White House would rather not deal with headlines about vaccinated staffers coming down with COVID at the exact moment they are singing the praises of getting vaccinated. On the other, they would rather keep contact tracing apolitical and skip the pandemic parlor game that consumed the press and the previous administration.

In the time before the vaccine, reporters kept meticulous notes of which Trump staffers were and were not wearing their masks. And after Supreme Court Justice Amy Coney Barrett’s ceremonial nomination in the Rose Garden was dubbed a “super-spreader” by Anthony Fauci, the press scrambled to carry out their own unofficial contact tracing to see who might have been the “patient zero” who infected President Trump, the first lady, and several members of Congress. Biden World would rather skip that drama.

The risks aren’t as severe now, thanks to the vaccine. Get the shot and, as Biden explained, “you are not going to die.” All the same, even some Biden allies find the lack of transparency frustrating. “I get they’re trying to show strength and resolve, but I hated this secrecy with Trump and I hate it here with Biden too,” said Bradley Moss, a partner at the law firm that represented the whistleblower in Trump’s first impeachment. “Keep the public informed. Secrecy breeds mistrust.”

So why not just tell the public how many breakthrough cases there have been? Again, as Psaki explained, “we're in a very different place than we were several months ago.”