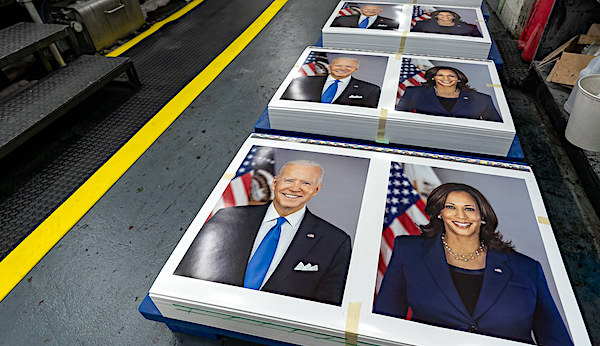 Inflation is accelerating -- every consumer in the country feels it every day. If there is any economic sense left in Washington, the rising inflation threat should grind President Biden's big-government spending plans to a halt.

Federal Reserve officials have called inflation “transitory,” but what if they are wrong? The public is clearly worried. According to a new Harvard CAPS/Harris poll released this week, 85 percent of Americans are concerned about inflation. For good reason. Last month, the Consumer Price Index rose at its fastest level since 2008.

At its recent meeting this month, the Fed announced that it would accelerate its expected interest rate hike timeline and discuss tapering its $120 billion in monthly bond purchases. We hope they do.

But another factor that would inflame inflation is adding to the heavy U.S. debt loads that the Fed's bond purchasing has facilitated. It’s Economics 101 that more money creation means the dollars in our wallets and bank accounts are worth less.

Yes, monetary policy is the Fed’s domain, but Congress can make the Fed’s job of heading off even steeper inflation easier by putting the kibosh on Biden's massive deficit spending plans. Biden has proposed $4 trillion in "once-in-a-generation investments" (in addition to the $1.9 trillion Covid relief package that passed in March).

Even liberal economists like Larry Summers have warned that Biden's spending blowout can overheat the economy and "set off inflationary pressures of a kind we have not seen in a generation, with consequences for the value of the dollar and financial stability." Summers argues, "the primary risk to the U.S. economy is overheating — and inflation." Biden's spending would fan the flames.

Many of Biden’s economic advisers believe that fiscal profligacy has no downside. They implicitly subscribe to “Modern Monetary Theory,” an economic doctrine that holds that sovereign debt can keep rising with no cost to future generations or the U.S. economy. We are still searching for any example, at any time, where this approach has worked. In most cases – Venezuela, Argentina, Mexico, Zimbabwe, and Germany after World War I -- the policy ends very badly.

Consider how Biden's supplemental unemployment insurance, extended as part of his Covid relief package, is contributing to inflation by preventing businesses from hiring the workers they need to meet consumer demand. Biden's $300 per week in extra benefits allows families with both parents out of work to earn about $72,000 a year in unemployment benefits -- not including the value of other social welfare programs like food stamps.

Small businesses around the country, including Sergio's Restaurants in Miami and HT Metals in Tucson, are finding it very difficult to find workers despite raising wages. A record 9.3 million jobs are currently unfilled, yet 7.6 million fewer people are working than before the pandemic. When small business supply can't meet rising consumer demand, prices rise.

Beginning this month, 25 states have halted these supplemental unemployment benefits. All states should immediately follow suit to reduce inflationary pressure. The labor market and inflation consequences of expanded unemployment insurance are just a microcosm of what's to come if Biden's massive social programs such as free college and de facto universal basic income take effect.

Biden's historic tax hikes on small businesses and investments would reduce the supply of both. His proposed labor regulations -- from a $15 minimum wage to the Pro Act, which would increase forced unionization and outlaw swaths of independent contractors -- would increase costs for some small businesses while forcing others to close up shop.

To prevent the enormous regressive inflation tax from getting much worse, Congress must block Biden's runaway spending and debt agenda. To borrow a phrase from the president, that's something that should unite all Americans.