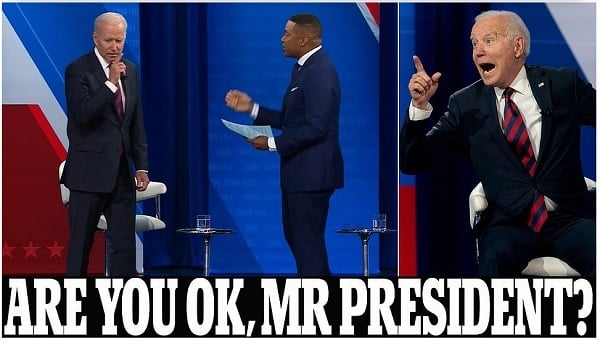 Joe Biden's verbal gaffes, stumbles and bumbles have made headlines for years – remember when he told a paralyzed supporter to "stand up" so the crowd could see him? – but his behavior at this week's CNN town hall with Don Lemon reached new heights.

It prompted one of the world's bigger media organizations, DailyMail.com, to bluntly ask, "Are you ok, Mr. President?"

"Biden loses this thoughts on vaccines, flubs answer on his foreign policy work and falsely tells town hall you WON'T get COVID if you have the shot," the publication proclaimed.

It quoted Biden saying, "The experts say we know that this virus is, in fact, uh, um, uh, it's going to be, or excuse me."

He said no one vaccinated will be sent to the ICU or die, and he "repeatedly gave confusing, misleading and non-linear answers when discussing masks, national security issues and COVID-19 vaccine approval." the report said.

The Mail said the town hall was "gaffe-filled" and quoted Biden's assurance that "You're not going to – you're not going to get COVID if you have these vaccinations." But it explained that statement is "false."

"Biden struggled at some points during his town hall to complete statements coherently as he lost his train of thought on multiple occasions," the report continued, noting that Republicans also were reacting negatively to Biden's fumbles.

"Is this for real?" was the comment from Republican Conference Chairwoman Elise Stefanik.

Talking about vaccines for children, the president rambled: "That's underway, just like the other question that's illogical. And I've heard you speak about it because you always – I'm not being solicitous – but you're always straight up about what you're doing. And the question is whether or not we should be in a position where you uh, um, are – why can't the, the, the experts say we know that this virus is, in fact, uh, um, uh, it's going to be – or, excuse me, we, we, we know why all the drugs approved are not temporarily approved by permanently approved. That's underway too. I expect that to occur quickly."

He took off on another tangent: "There are trusted interlocutors. Think of the people — if your kid wanted to find out whether or not there were — there’s a man on the moon, or whatever — you know, something, or, you know, whether those aliens are here or not — you know, who are the people they talk to beyond the kids who love talking about it? They go to people they respect, and they say, 'What do you think?'"

Grabien Media founder Tom Elliott noted Biden was "crushing it," when he posted a video of Biden's discussion with Lemon.

Images of the event showed a mostly empty auditorium.

On national security, he again appeared to be follow several thoughts, at the same time.

"And I'll say one last thing: You're going to – I've had a lot of experience internationally and – I mean, not good or bad, just I have – I chaired the Foreign Relations Committee, I've been deeply involved. I did national security for our last – the administration with Barack. 'But folks, the rest of the world's wondering about us. Those of you who travel abroad, it's not a joke. Not a joke. 'Ask — you know, when I went to this G7, all the major democracies. I walked in and go, 'America's back.' I'm serious, heads of state. I give you my word as a Biden. They said, 'Are you really back?'"

The Mail pointed out Biden not only got COVID wrong, he was misleading when he said, "We've created more jobs in the first six months of our administration than any time in American history. No president, no administration, has ever created as many jobs."

Part of that, the Mail reported, is because the U.S. population is larger than in the past, and "When calculated as a percentage of the workforce, job growth under President Jimmy Carter increased more quickly from February through June 1977 than the same five months this year: 2.2 per cent for Carter, compared with 2.1 per cent for Biden."