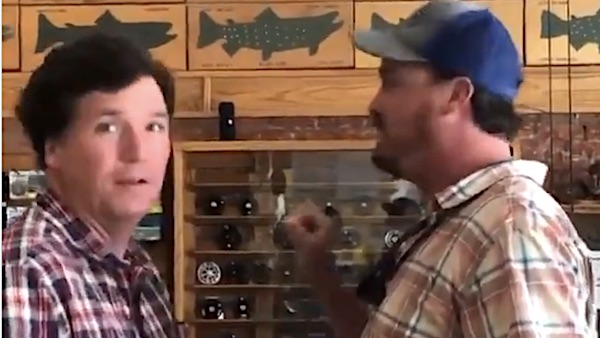 Fox News anchor Tucker Carlson, left, is confronted by a man in a fishing shop in Livingston, Montana, on Saturday, July 24, 2021. (Video screenshot)

“Let me tell you this: I don’t like it. I don’t like it when people do that because I would not want it to happen to me,” Lemon said, after showing the clip of Carlson on his show, “Don Lemon Tonight.” Lemon, who described Carlson as a “Fox propaganda host,” criticized the man who confronted Carlson in a conversation with CNN commentator Ana Navarro.

“We’re all on TV, we’ve been approached. We hear good things, we hear bad things from people. We don’t even know who they are, it’s part of the gig,” Lemon said

“Don’t you think this went a little too far, though?,” Lemon added.

Ana Navarro responded, saying Carlson should “deal with it,” explaining her similar encounters with public confrontation and the Fox News host’s stance on sensitive topics like COVID-19 vaccinations.

“Your First Amendment right doesn’t mean invading my personal space, I’m sorry, Ana, I understand what you’re saying and I get it,” Lemon said responding to Navarro.

I think that what Tucker says much, much of the time is completely reprehensible and divorced from reality, but he has a right to be in a space and not be accosted and not be ambushed by anyone,” Lemon said.

Tucker Carlson tells a man who confronts him in a fly fishing shop to “settle down, son.”
pic.twitter.com/PlsCSU9HWS

Saturday’s video shows a man identified as Dan Bailey confronting Carlson as he was shopping with his family at Dan Bailey’s Outdoor Company in Livingston, Montana, which has no affiliation to the man who heckled Carlson, the New York Post reported.

Bailey called Carlson “the worst human known to man,” and accused him of killing people with vaccine misinformation and supporting “extreme racism.”

“I appreciate that,” Carlson responded, adding that his daughter was with him and laughing when he realized the interaction was being filmed.

“Settle down, son,” Carlson added before walking away.