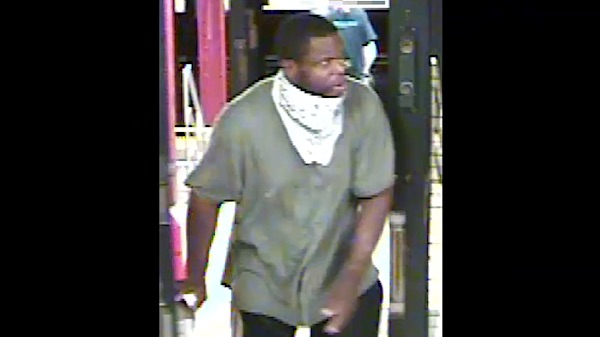 Police have released this image of the suspect. (Video screenshot)

A search for a suspect is currently underway in New York City following an attempted robbery that resulted in a mother being allegedly thrown down a subway staircase, the New York Daily News reported Monday.

Than Htwe, 58, is in critical condition after she was purportedly assaulted during a Saturday robbery, NYDN reported. The episode occurred as the mother and her son were walking up the staircase of the Canal Street Q train station at roughly 9:40 a.m.

WANTED for ATTEMPTED ROBBERY: On 7/17 at 9:40 AM, inside the Canal St “N” subway station in Manhattan, the suspect tried to forcibly remove a bag, causing two victims to fall down the stairs, leaving one victim in critical condition. Any info? DM @NYPDTips or call 800-577-TIPS. pic.twitter.com/hRiM0brDZa

Htwe underwent surgery after the incident that also involved her 22-year-old son being injured by the suspect. The New York Police Department released video Sunday of the alleged suspect exiting a station turnstile wearing a white bandana, gray T-shirt and black pants.

The mother and son were sent plunging down the stairs after the suspect attempted to grab and abscond away with the son’s bag, NYDN reported.

A witness told the New York Post that the son was pleading for help as his mother’s head was bleeding intensely.

Htwe made the move to New York from Burma in 2018, in hopes of improving her son’s education, according to the NYP.