Cubans take to the streets in protest of the communist regime on July 11, 2021 (Video screenshot)

After the biggest public protest in three decades, Cuba's communist dictator called on "revolutionary" citizens to defend the regime.

President Miguel Diaz-Canel, who also is the leader of the Communist Party, blamed the U.S. for the uprising, the Washington Post reported.

"The order to fight has been given – into the street, revolutionaries!" he said in an address to the nation.

"We are calling on all the revolutionaries in the country, all the communists, to hit the streets wherever there is an effort to produce these provocations," Diaz-Canel said, according to Reuters.

Three years ago, Diaz-Canel became the first leader of the communist regime outside the Castro family. 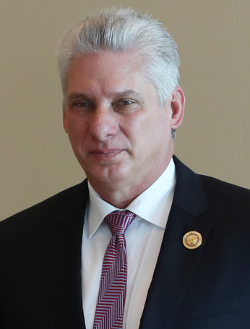 On Sunday, thousands took to the streets in cities across the island nation shouting "freedom" and "down with the dictatorship." In response, the government deployed tear gas and detained dozens of protesters.

It was the biggest protest against the regime since the so-called Maleconazo uprising in 1994, which led to a wave of Cubans fleeing the country by sea. But Cuban activist Carolina Barrero went further, the Times reported, calling it the "most massive popular demonstration to protest the government that we have experienced in Cuba since ’59," the year Fidel Castro took power.

"What has happened is enormous," she said by text to the Times.

Amid the worst economic conditions in decades, Cuba has experienced a resurgence of coronavirus cases. The pandemic has shut off the nation's tourism dollars, exacerbating shortages that require people to wait in long lines for basic goods.

Sen. Ted Cruz, R-Texas, whose father fled Cuba, said on Twitter the regime will be "consigned to the dustbin of history."

"It has brutalized & denied freedom to generations of Cubans, and forced my family & so many others to flee," he wrote. "The American people stand squarely with the men & women of Cuba and their noble fight for liberty."

The Communist Cuban regime will be consigned to the dustbin of history. It has brutalized & denied freedom to generations of Cubans, and forced my family & so many others to flee.

The American people stand squarely with the men & women of Cuba and their noble fight for liberty. https://t.co/09hdGQVJLh

Cruz called a statement on the protests by Julie Chung, the acting assistant secretary for the State Department's Bureau of Western Hemisphere Affairs. "Orwellian double-speak." The senator noted Chung's focus on the Cuban people expressing "concern about rising COVID cases," with no mention of widespread cries for "freedom" and "down with the dictatorship.

Chung wrote: "Peaceful protests are growing in #Cuba as the Cuban people exercise their right to peaceful assembly to express concern about rising COVID cases/deaths & medicine shortages. We commend the numerous efforts of the Cuban people mobilizing donations to help neighbors in need."

“to express concern about rising COVID cases”…no mention of widespread cries for “FREEDOM” or “down with the dictatorship!!” Wonder why? 🤔 https://t.co/QpXd4adEok

The Times reported the protest movement was sparked by Cuban celebrities tweeting the hashtag #SOSCuba. The paper spoke with Adonis Milán, a theater director in Havana, who described the situation.

“This is no longer a question of freedom of expression; it's a question of hunger," Milán said. "People are hitting the street. They are asking for an end to this government, to one-party rule, to repression and the misery we have lived through for 60 years."

A few hours later, the Times said, Milán called back, sobbing. He said the internet had been cut off and anti-riot squads were in the streets.  The regime had arrested a number of artists who demanded time on national television, he said, but he "managed to escape."

This is deeply moving.

Watch as Cubans wave the American flag while marching against the island’s 62 year-old communist dictatorship on the streets of Havana.

Biden: 'We stand with the Cuban people'

The White House had no official response to the protest for 24 hours. On Monday morning, the president's communication office issued a statement referring to the "authoritarian regime," without, as some analysts noted, mentioning communism.

"We stand with the Cuban people and their clarion call for freedom and relief from the tragic grip of the pandemic and from the decades of repression and economic suffering to which they have been subjected by Cuba’s authoritarian regime," the White House said. "The Cuban people are bravely asserting fundamental and universal rights. Those rights, including the right of peaceful protest and the right to freely determine their own future, must be respected. The United States calls on the Cuban regime to hear their people and serve their needs at this vital moment rather than enriching themselves."

At the White House press briefing Monday, Jen Psaki described it as a statement "we put out in the president's name, in his voice."

Is Jen Psaki saying Joe Biden’s statement on the Cuba protests did not come from him?

“The statement...we put out in the president’s name this morning, in his voice of course" pic.twitter.com/cO1RIZq1P4

Later, Biden reiterated the statement in televised remarks at a Cabinet meeting at the White House.

President Biden makes a strong statement standing with the protesters in Cuba and says people in Haiti deserve peace and security after their president was assassinated. pic.twitter.com/hwb58eZN3C

During the 2020 election, Sanders defended some of Fidel Castro's policies.

In a "60 Minutes" interview after his victory in the Nevada caucuses, Sanders was asked by Anderson Cooper why the Cuban people didn't rise up and help the U.S. overthrow the Castro regime.

In a speech at the Republican National Convention last year, former Cuban refugee Maximo Alvarez warned that many Americans have swallowed the "poison pill" of communism.

In an interview in April 2021, he recalled witnessing during his childhood Fidel Castro's elimination of human rights. 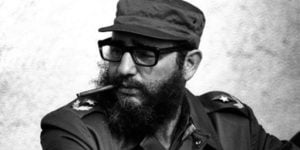 Alvarez fled to the United States in 1961 under Operation Peter Pan.

Interviewer Lisa Boothe, referring to Alvarez's RNC speech, asked him if he believes Americans have "swallowed the communist poison pill."

"Not only have they swallowed it, they digested it," Alvarez replied. "Listen to the media. They’re no longer objective. You can tell how much they hate this country.

"Look at our, our academia!" he said. "Our kids are not being ... they're indoctrinated! They are taught that America is a bad country. That we're a bunch of racists, that we're bad people, and we have to pay back."

Alvarez said that if "this country was racist, I wouldn't be here."

"If this country was a racist country, most of us wouldn’t be here because even some people in your family came from another country," he said.

Alvarez address the RNC last August in the wake of Bernie Sanders' declaration that his "revolution" has mainstreamed policies once thought extreme in the Democratic Party.

"I'm speaking to you today because I've seen people like this before," Alvarez said.

Sanders, as WND reported, touted the success of his far-left "revolutionary" movement in his speech on opening night of the Democratic National Convention.

"Our campaign ended several months ago, but our movement continues and is getting stronger every day," said Sanders.