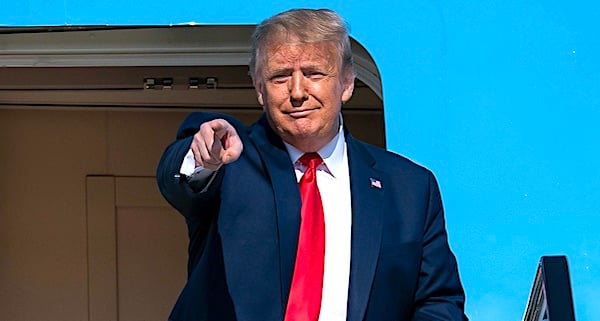 One of the discussions among fans of President Trump on how to return him to the White House has focused on having him named U.S. House speaker, presuming Republicans take the majority in the House in 2022 as expected.

Then an impeachment of Joe Biden, and the same for Kamala Harris, and he would return to the Oval Office.

The fact is that no House speaker ever has taken that office without already being an elected member of Congress, although that's not required by the Constitution.

But it's not so far-fetched that Democrats aren't working now to preclude that very scenario.

The Citizen Free Press reports that U.S. Rep. Brendan Boyle, a Democrat from Pennsylvania, has introduced a bill that, if signed into law, would allow only an elected House member to be speaker.

Democrats apparently are concerned because President Trump, when asked about the idea weeks ago, called it "so interesting."

Boyle's plans are called "Mandating That Being an Elected Member Be an Essential Requirement for Speakership Act."

Boyle explained specifically why he feared the status quo, and wants a change made.

"The speaker of the U.S. House is second in the United States presidential line of succession. That Donald Trump’s name would even be tossed around as a potential speaker in the people’s house, should serve as an alarm bell that our current requirements need to be amended in the name of protecting our nation and our democracy," he said.

Trump had responded to a question from a radio host about the idea with, "That's so interesting."

The U.S. Sun said the U.S. Constitution now allows that the House speaker could be an outsider – not a current member of Congress – although that situation never has happened in America.

A Trump spokesman later said the former president has no desire to be the speaker.