Marxism is now filling the void of religion in America, with its fervent belief in man as the "new god." A 2019 Pew Research Center survey found that Christianity is rapidly evaporating in the United States, only 65% of Americans now describing themselves as Christian.

This is a shockingly rapid decline, considering that the number was well over 90% believers in God just a few years ago.

As Marxist atheism is now preached as a new gospel – with its hatred toward traditional values – the mainstream media, schools, universities and popular groups such as Black Lives Matter set the tone for a new phenomenon: Marxist America, the new Soviet Union.

He then adds: "Since then, I have focused on what I saw as the main causes of collapse in both the Soviet and in the American case: exorbitant debt, problems in the energy sector and unreformable political systems mired in corruption, their elites delusional in their feelings of omnipotence."

The Soviet Union was Russia leaving its traditional, historical Orthodox values and implementing modern state atheism in a Communist-Marxist system. Controlled by a small, ruthless elite who came to power through a bloody coup d'etat, traditional values were brutally scrapped. A particularly interesting trait is that "the people" were hailed in speeches, but in reality their role was to strictly obey the totalitarian Communist rulers. With remarkably little personal freedom, free speech was non-existent. Whoever protested, lost their jobs, their standing in society, were sent to the Gulag concentration camps or killed.

The Russian writer, philosopher and Nobel laureate Alexandr Solzhenitsyn described the Soviet experience this way: "Men have forgotten God; that's why all this has happened."

Yet, still – remarkably enough – just a few years after the Communist Soviet total collapse, America still chooses to walk down the same path. Even when knowing where the totalitarian Soviet experience ended, the Big Tech billionaires with friends who steer the wheel still push for Sovietism. It is completely baffling and strengthens Solzhenitsyn's description of what happens when darkness clouds the mind of rulers.

This religion-hating ideology aims at creating a utopian world where God is dead and mankind rules itself without any interference from spiritual powers. Man becomes god in Marxism. The ideal is that "the Marxist class" will install an atheist utopia.

The philosopher Paul Tillich defined religion as "that which is man's true concern." Whatever is most important to man becomes his religion, his passion – his everything. In the "Large Catechism," Martin Luther summed it up by stating that whatever your heart clings to and confides in, is really your God, the foundation upon which you rest your life.

Marxism is definitively the new religion in America, hailed as the solution to the problems of society, its leaders enforcing totalitarian mind control.

The nihilist ideology asserts that the Creator, who resides in the metaphysical realm that affects our worldly dimension, does not exist. He does not demand justice among men; he sees no evil; and there is no judgment awaiting us in the coming, post-death world.

This is a brutal parting from traditional values and religion, which sees the world as split between evil and good forces. Man actively needs to fight for that which is good, regardless of his gender, class or level of education. Marxism, on the other hand, views man as inherently good. If something goes wrong, society is to blame, not the individual. The Marxist battle is between the classes. The rich are "inherently evil," whilst the Marxist working class and the poor are viewed as inherently "good." Victimhood or belonging to an oppressed minority group thus becomes a goal in itself, a path to glory, an indicator that you are "among the righteous."

In reality, no Marxist society has ever been able to produce bliss among men. Let me mention some that have tried: the Soviet Union, National Socialism under Hitler in Germany, Mao Zedong in China. All three produced elites who showed gross negligence of the needs of precisely the poor and the working class, genocide on a mass scale, mass murder of dissidents and a subdued people with very few human rights.

Hanne Nabintu Herland
Hanne Nabintu Herland is a historian of religions and best-selling author. She is the founder of The Herland Report Scandinavian news site, TV channel on YouTube and Podcasts which have millions of readers/viewers yearly. This is a great place to watch interviews with leading intellectuals from across the political spectrum. Her latest book is "Trump: The Battle for America." Also read "The Culture War: How the West Lost its Greatness." To learn more about her, visit www.theherlandreport.com and follow her on social media: YouTube, Facebook and Twitter.
@HanneNabintuHer
The brutal ruthlessness of the despicable Karl Marx
Still and always the most significant person in world history
The son of Mary: God's radical solution to evil
Kanye West, Hitler and the Nazi ideology
Are we headed for a decade-long global depression?
See more... 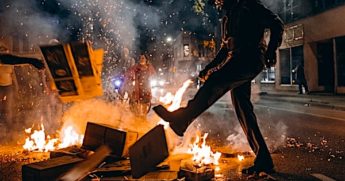