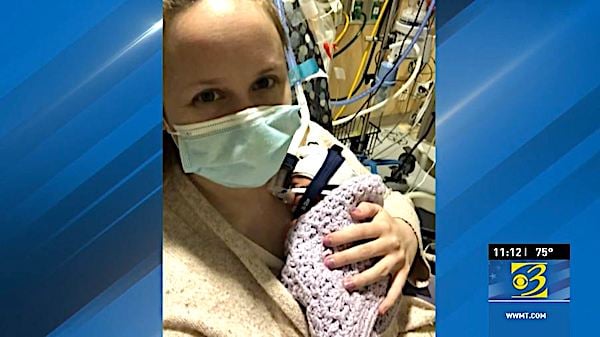 A Michigan family is celebrating after welcoming a set of monoamniotic twins, an extremely rare condition in which the two babies share an amniotic sac. Also called Mono Mono or Momo twins, it occurs in less than 0.1% of all pregnancies. But Sarah Pasco managed the high-risk pregnancy well, and her twin girls, Chloe and Caylin, are currently recovering in the NICU.

Pasco was admitted to the hospital at 26 weeks, which meant that she had to leave her husband and two young children at home. The hospital’s COVID regulations prohibited them from visiting, a requirement that was further necessary when Pasco caught COVID herself. “That was just one more thing to add on. I ended up to have to be on blood thinners because COVID can cause clotting. So extra things because of COVID,” she said.

After months of harrowing doctors visits and some complications, the girls were safely born at 32 weeks on June 10. “They’re really miracles. And so many bad things could’ve happened. But they fought it. Even in the NICU they have flown through their goals. They’re just tough little cookies,” Pasco told the station.

According to Texas Children’s Hospital, carrying monoamniotic twins comes with a number of increased risks, including the chance that the umbilical cords could become entangled or compressed. If this happens, it could compromise the health or survival of one or both of the preborn babies. The babies are also at risk of weakened blood supply, restricted growth, congenital malformations, or amniotic fluid abnormality, among other risks. The Pasco babies pulled through despite all of these dangers.

Pasco announced on her Facebook page that her twins will stay in the NICU until their due date on August 4. She ended that post by saying, “Momos are miracles. It’s a scary diagnosis, one that is met with ‘make sure you bring someone with you to your appointments, things can go south quick.’ But we serve a wonderful God who created these unique babies and has an incredible plan for their lives. I feel very blessed to be able to carry these sweet loves.”