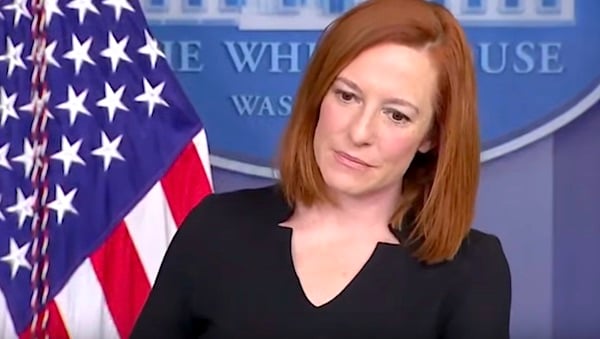 The Texas Democratic lawmakers who hurriedly fled the state last week to deny their Republican colleagues a quorum and thereby stall a voting reform bill, forgot to pack their masks. They were not wearing them when they smiled for a selfie on a chartered flight to the nation’s capital. Their faces were not covered when they met with Vice President Kamala Harris in Washington either.

Some of them are sick now. Six members of the Texas delegation have reported testing positive for the coronavirus, and one White House official is also ill. But White House Press Secretary Jen Psaki didn’t say much specifically about that case Tuesday other than to “wish our colleague a speedy recovery.”

She chaffed at suggestions that the meeting with Harris was “a super-spreader event.” She confirmed that the infected White House official had been previously vaccinated. And she noted that medical professionals are taking the requisite precautions before adding, “The news today is that while breakthrough cases will happen, the vaccines are effective and prevent against serious illness and death.”

Case closed. At least, that’s what the White House would prefer. It is clear the administration wants a strictly apolitical kind of contact tracing.

The press secretary was asked if there were other breakthrough cases among White House staff, instances where aides still tested positive despite being vaccinated. “There have been,” Psaki answered. And then she explained exactly why she would not tell reporters in the room more: “I will say that according to an agreement we made during the transition to be transparent and make information available, we committed that we would release information proactively if it is commissioned officers. We continue to abide by that commitment.”

As of Tuesday evening, a White House aide was still trying to track down the specifics of that commitment.

The transparency change is due in no small part to the country having entered a less dangerous phase of the pandemic. It is also evidence that the administration does not want to play the same pandemic parlor game that consumed its predecessor.

When there was no vaccine, reporters made regular note of who walked around 1600 Pennsylvania Ave. with or without a mask. And when the 45th president got sick, the media did their best to determine who was and wasn’t in regular contact with him, even as medical staff carried out their own contact tracing.

Worried that Americans would be cavalier about the coronavirus after watching Donald Trump flout mask recommendations, Dr. Anthony Fauci told CBS News that when the president nominated Amy Coney Barrett to the Supreme Court at a Rose Garden gathering, he was hosting a “super-spreader event.” Afterward, the president and first lady became ill. Senators, governors and senior White House aides in attendance also tested positive.

Fast-forward nine months, and former Trump staffers are having flashbacks. One former senior administration official complained to RealClearPolitics how “the White House press corps live-tweeted personal health information,” and recalled how the health of even the least senior staffers was fodder for national news. “The level of journalist hypocrisy and malpractice with the Biden administration is appalling.”

But the risk is not the same now, and neither is the coverage — clearly because the vaccine exists and has been readily available. Reporters pushed the White House on Tuesday to say more about who was sick and who wasn’t. But Psaki would not budge, and recent headlines have less to do with an aide at the White House and more to do with President Biden’s efforts to get more of the country vaccinated.

Biden took his mask off back in May during a ceremony to celebrate a change in guidance from the Centers for Diseases Control. “For now, after a year of hard work and so much sacrifice, the rule is very simple,” he said as a silk black mask dangled from his hand. “Get vaccinated or wear a mask until you do.” The fully-vaccinated president hasn’t covered his face since.

All of this is backed up by the experts and the latest science, the press secretary explained. Protocols are in place. And the vaccine makes breakthrough cases much more manageable. “We’ve seen that statistically across the country with 99.5% of cases in hospitals being for individuals who are not vaccinated,” Psaki said, “and we will continue to abide by CDC guidelines.”

What this White House will not do is engage in any kind of media speculation about the health of staffers. And the new COVID cases among the Texas Democrats hasn’t changed anything either. The White House message to that group?

“Our message continues to be, ‘Thanks for standing up for voting rights, and the rights of Americans to have their voices heard at the voting booth,’ and we appreciate their efforts in that regard,” Psaki said.