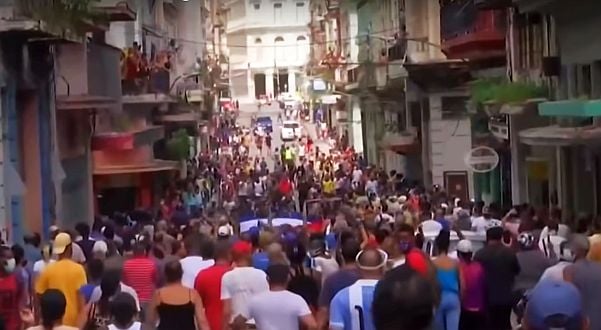 The Cuban government cut internet service to the island and left many cities and towns without electricity. But the CBS affiliate in Miami reported some people managed to flood social media with videos documenting the repression and asking for help.

On Sunday, protesters took to the streets across Cuba waving American flags, and shouting "freedom" and "down with the dictatorship" in the biggest public demonstrations in nearly three decades. By Sunday night, police had put down demonstrations in Havana, but they continued Tuesday in other parts of the island.

One video shows Cuban police beating a man who was protesting. People can be heard screaming in Spanish, "Do not kill him."

As the police walk away, the man lays motionless on the sidewalk.

Police have been going into homes and taking teenagers, forcing them to fight against their own families and people, Miami's WFOR-TV reported.

A family is seen begging in one video to let the teenager go before authorities finally take him.

Another video shows young teenagers put in the front lines by authorities to block protesters.

Others are heard declaring, "Liberate yourself."

breaks my heart to see the violent repression of protestors in cuba... 😢 pic.twitter.com/0MFwfUY1RD

A woman who just arrived in Miami from Cuba told WFOR the situation is "really bad, but we are hopeful for any sort of help, because there is too much suffering."

"No medicine, no food. Everyone is in the streets. We need some protection and people need to continue to protest."

The Black Lives Matter organization issued a statement this week in support of the Cuban communist régime.

BLM praised the régime for its "solidarity with oppressed peoples of African descent," including "protecting black revolutionaries" like Shakur.

"A lot of them were in the streets getting their heads cracked open by that régime," he said in a Fox News interview on Thursday.

We have NEVER seen a day like today in #Cuba

Frustration with the dictatorships incompetence,greed & repression is mounting rapidly pic.twitter.com/eSAr8Xrxpf