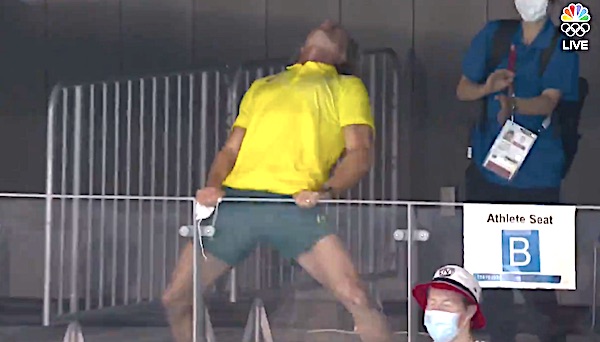 Titmus became the first woman to beat Ledecky, a five-time Olympian, in an individual Olympic final, the Washington Post reported. Titmus came from behind in the last 50 meters of the race, recording the second-fastest time in history, CBS8 reported.

Boxall was recorded reacting to the fellow Australian‘s win by tearing off his mandatory mask, pumping his fists, and gyrating against the railing in a frenzy.

when the preworkout kicks in #TokyoOlympics pic.twitter.com/xkU7zyF0gG

“It built up. When I saw the race unfolding I couldn’t keep it in,” Boxall told FOX Sports Australia. “I need to apologise because I actually took my mask off by mistake and it ripped and I just lost it in the moment.”

“I’ve seen little snippets of it. That’s just like Dean. He’s very passionate … he becomes very animated,” Titmus said after the race, according to Fox News. “I think that this is just as much for him as it is for me. He’s sacrificed a lot of his family life, his kids, his wife and his job. He puts 100% into being a swimming coach and I would not be here without him.”

“He means everything to me,” she said, according to FOX Sports Australia. “Coming into this race we knew what we had to do. We didn’t discuss what I wanted to do in the pool.”

Though Boxall did not celebrate in the same way at the medal ceremony, he did start to tear up. “He was crying and I was trying to contain the emotions, but it’s good to see how much it means to him too,” Titmus said, according to Fox News.