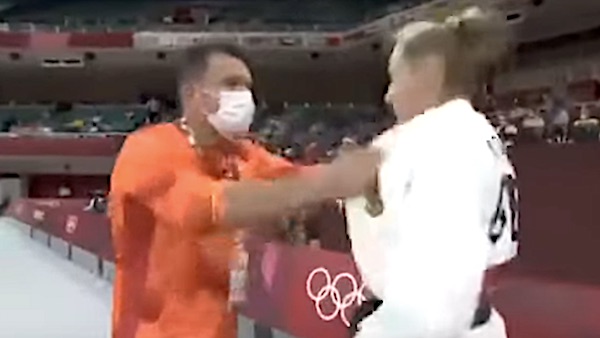 Olympic viewers were shocked after a video went viral of a German judo athlete’s pre-match ritual on Tuesday.

Martyna Trajdos’ unusual pre-match act involved her coach shaking her and slapping her in the face before she entered the Olympic event, video shows.

The slap prompted fans to express their concerns for Trajdos, which she quickly defended on Instagram.

“Don’t worry guys! That’s the ritual which I chose before fights. My coach is just doing what I want him to do to fire me up!,” Trajdos said in the post.

Trajdos was preparing for a match against Hungary’s Szofi Ozbas in the Women’s -63kg Judo competition when the pre-game ritual was caught on camera, the New York Post reported.

The video drew concerns and criticism from journalists on Twitter, who wondered if the act was consensual.

“There is context. There must be context. *whispers: what is context?*,” journalist Shireen Ahmed said in a tweet.

“I have an overwhelming urge to smack him back. (even if this is some mutually acceptable, bizarre training technique),” journalist Carolyn Dunn wrote in a tweet.

Trajdos continued to defend her coach, Claudiu Pusa, after her loss to Ozbas, reassuring fans that the slap is a normal pre-match routine.

“This is what I asked my coach to do so please don’t blame him. I need this before my fights to be awake,” Trajdos said in her Instagram story that has since been taken down.