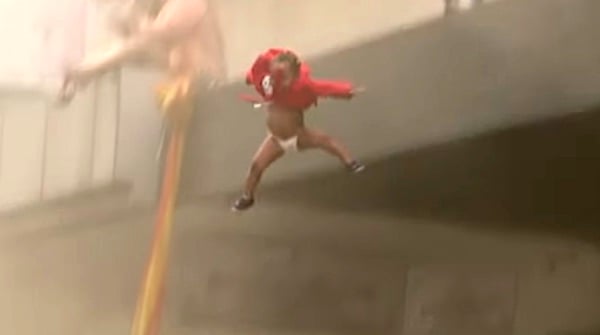 A baby is thrown from a burning building amid chaos during riots in South Africa, July 14, 2021. (Video screenshot)

A mother threw her baby from a building after looters allegedly set it on fire in Durban, South Africa, 9 News reported Wednesday.

People below the building caught the child, and the mother and baby were reunited later, according to 9 News.

Dozens of people are dead, and hundreds are arrested in riots after former President Jacob Zuma was found guilty of contempt of court and sentenced to 15 months in prison for refusing a court order to appear before an anti-corruption commission in June.

“The path of violence, of looting and anarchy leads only to more violence and devastation, as well as suffering,” said President Cyril Ramaphosa of South Africa at a press conference.

The unrest has led to looting in township areas in Gauteng and KwaZulu-Natal provinces, with thousands stealing food, electric appliances, liquor and clothing from stores, police said.

Police said they are investigating 27 deaths in KwaZulu-Natal and 45 in Gauteng and explosions that occurred when people tried to break into ATMs.

Nearly half of the population of South Africa lives in poverty, with the coronavirus lockdowns leading to food insecurity and unemployment, according to The Borgen Project.

The army has sent 2500 troops to support the police in arresting rioters, but that hasn’t stopped the looting entirely. At least 1,234 people were arrested in Gauteng and KwaZulu-Natal, according to the AP.

Some of those arrested were bleeding from the shattered glass on floors slippery, according to the AP. Security and the police fired stun grenades and rubber bullets at rioters who tried to loot shops.

South Africa also published a proposal in June to allow women to marry multiple husbands. A discussion for the Green Paper on Marriages in South Africa said the permission of polyandry was necessary to be “consistent in the application of the equality principle,” as men can practice polygamy, having more than one wife.