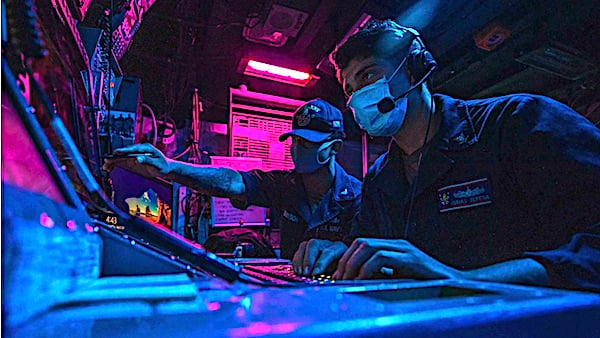 America is at war. And our adversary, sadly, lies within.

There is a Marxist revolution now exploding throughout America – from our classrooms, to our streets, to the halls of Congress and the White House. There is not even the slightest exaggeration in that statement.

For a reality check, consider that the No. 1 bestselling book in the country right now is “American Marxism” by Mark Levin. Other top-selling nonfiction books include “The Enemy Within: How a Totalitarian Movement is Destroying America” by David Horowitz, “The Tyranny of Big Tech” by Sen. Josh Hawley and “Irresistible Revolution: Marxism's Goal of Conquest & the Unmaking of the American Military” by Matthew Lohmeier. (You’ll recall that Lohmeier is the heroic Space Force officer who Team Biden recently ousted for daring to expose the rampant Marxist indoctrination being imposed on America’s armed forces.)

This is real, folks. And let's be totally clear as to what we're really dealing with: What we cryptically refer to as "The Left" – code words for a godless, revolutionary movement steeped in pathological anger and churning rebellion against America as a uniquely blessed Judeo-Christian, constitutional republic – is at war not with “racism” and “inequity” and Trump supporters (whom they label “white supremacists” and “domestic terrorists”), but with America herself.

Traditionally, society’s natural defenders against such an onslaught of lies and deception would be a free and independent press. That’s why Thomas Jefferson famously warned, “The only security of all is in a free press.” Journalists are supposed to be professional Truth-tellers – because when the truth about threats to a nation is boldly and widely proclaimed and understood, that nation can begin course-correcting, healing and breathing easily again.

Unfortunately, today’s elite media consists almost entirely of lying, corrupt, self-serving, low-IQ cheerleaders for the revolution. As a result, the number one target of today’s Big Tech totalitarians is that tiny part of the news media not extoling the virtues of the ascendent Democrats’ insane, delusional and destructive agenda, but rather, committed to reporting the truth … no matter the cost or consequences.

And I can assure you, WND, now in its 25th year of bold, independent, 24/7 news reporting, is paying a great price, and is suffering major consequences, for reporting truthfully. Just a few examples:

* The Southern Poverty Law Center, the wretched leftwing hate group that Big Tech companies rely on to identify hateful extremist groups (and which the Biden administration just announced it is teaming up with to tackle “extremism”) characterizes WND as an “extremist group.” Apparently, your favorite news site engages in “manipulative fear-mongering and outright fabrications designed to further the paranoid, gay-hating, conspiratorial and apocalyptic visions … from the fringes of the far-right and fundamentalist worlds.” Translation: We’re conservative and Christian.

* A few months ago, Newsguard, the internet’s self-appointed guardian of truthful reporting, complained to me about a WND piece suggesting COVID-19 originated in a biolab, and not from a bat someone purchased to eat at a “wet market.” “Firstly,” Newsguard authoritatively informed me, “medical authorities have found no evidence that the virus was created intentionally or otherwise in a lab,” adding, “the CDC states that its research suggests ‘recent emergence of this virus from an animal reservoir.” Except today, virtually all experts, including the CDC, publicly concede that the coronavirus pandemic almost certainly originated in the Wuhan Institute of Virology, the level-4 biolab where dangerous “gain-of-function” research was being conducted on bat viruses, secretly funded by the U.S. taxpayer thanks to Anthony Fauci’s approval.

* Three major international online ad companies – TripleLift, AppNexus/Xander and Teads – all recently canceled WND, seriously hurting our revenues. Why? One said we engaged in “hate speech” while another specifically cited an opinion article critical of allowing homosexual couples to adopt children. The way I see it, if WND has to go out of business for affirming such obvious and crucially important truths, such as defending the innocence of our nation’s children, then so be it.

* Since last September, Facebook has massively suppressed WND’s traffic on its platform – by up to 90% – by confining us to what is known to insiders as “Facebook Jail.” This hurts tremendously when you have close to a million followers. Why is Facebook doing this? I spent an hour with two Facebook reps to find out, but they could provide neither a reason for the radical suppression of WND, nor any real recourse for us.

There’s much more, but here’s where we are now: As a result of all the aforementioned attacks and others (I haven’t told you about the malicious lawsuits, the major hack attacks that almost shut us down, and other threats and assaults of every imaginable sort), WND is suffering seriously hard times.

We’ve cut our staff down to remain lean and competitive, and all have had to endure big pay-cuts and late paychecks – and sometimes to go without pay at all. It’s very hard to keep financially ahead of the relentless attacks on us and to pay our fantastically dedicated and hard-working staffers – most of whom have been with us (believe it or not) for over 20 years!

Unlike most major news sites – even many conservative ones – WND does not have a billionaire sugar-daddy pumping money into our operation as needed. We’ve always done it the old-fashioned way, earning our own way. Of course, there’s a good side to that arrangement, since we’re beholden to no one but God. However, because the leftwing elites, Big Tech and cancel culture have made it almost impossible to operate by taking over the internet and suppressing, censoring and canceling everything decent, American and Christian, we’re really struggling for our lives right now.

In this situation, we have one hand to play – one remaining option. But it’s a good one.

We can appeal to you, our loyal readers.

We took the trouble to do what a few other forward-thinking news organizations have done – to form a 501(c)3 nonprofit organization called the WND News Center. This IRS-approved nonprofit is dedicated to promoting “independent, fearless, truthful news and analysis in an age of rapidly increasing lies and deception” and “shining a bright and honest journalistic light on today's world, including the lawless political and cultural forces that daily threaten Americans' happiness, well-being, security and freedom.”

I’m asking you today to really think hard and prayerfully about all this, and then to consider making a generous tax-deductible donation to the WND News Center.

WND is the oldest online Christian journalism organization in America, staffed by experienced professionals from all the major broadcast and print organizations, but who are also committed Christians. The WND News Center, which has been approved and designated by the IRS as a public charity, makes our original investigative reporting, breaking news, analysis and commentary available free for re-publication to other qualified news organizations.

Friends, WND and the WND News Center cannot survive without your support. It’s as simple as that. If you help us, we will be able to boldly report, like no one else, on the tremendous forces of anarchy, insanity and spiritual darkness that are now washing over our beloved republic. Help us push back against the tide of darkness!

Whatever you can donate, I just want you to know that you are deeply appreciated by all of us, just as, in turn, I know our special brand of journalism is appreciated by millions of readers. Please help keep the flame of America's free press alive! We have a brief window of time, during which all of us, working together, can still save our country.

Thank you for taking the time to read our message. This is a time for bold, courageous action – for all of us. Our adversaries aren’t holding back, and neither should we. I pray you will be inspired to join with us by making a generous tax-deductible donation to the WND News Center. If you prefer to mail your donation, please make your check out to "WND News Center" and mail it to: WND News Center, P.O. Box 100, 580 E Street, Hawthorne, NV 89415-0100.

Thank you so much from all of us at WND, and God bless you.