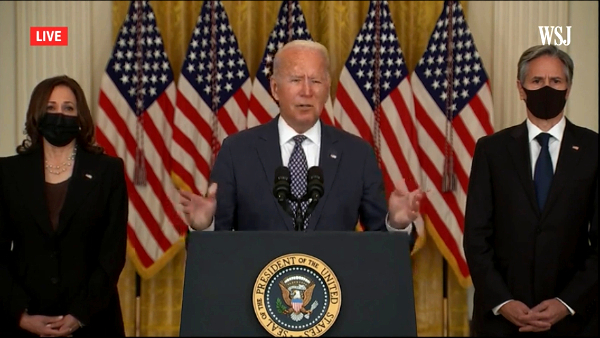 Amid sharp bipartisan criticism at home and abroad for his handling of the U.S. withdrawal from Afghanistan, President Biden told the nation in a live address Friday he will "mobilize every resource necessary" to evacuate Americans and Afghan allies and ensure "that every American who wants to leave can get to the airport."

"There will be plenty of time to criticize and second guess when this operation is over, but now I'm focused on getting this job done," he said.

Answering a question from a pre-selected reporter, Biden insisted his has "seen no questioning of our conduct by allies."

"As a matter of fact I've got the exact opposite, (that we have been) acting with dispatch and doing what we said we'd do," he said.

Strong rebukes, however, have come openly from allies Britian, Germany and others, charging NATO partners were left in the dark as a "catastrophe" developed. 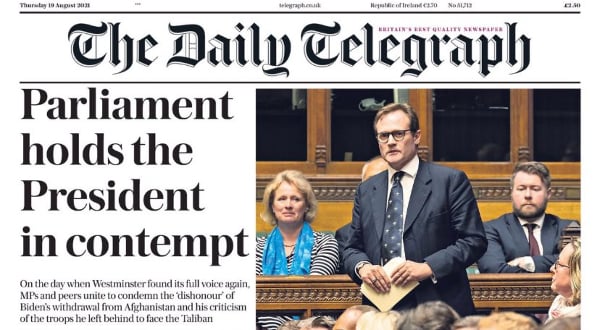 Biden insisted the U.S. has no interest in Afghanistan, arguing the objective of removing al-Qaida and "getting" Osama bin Laden has been accomplished.

"If Bin laden had gone to Yemen, would we have gone to Afghanistan?" he asked.

"You've known my position for a long, long time," he said. "It's time to end this war."

"This is about America leading the world and our allies have agreed with that," he said.

Critics, however, immediately pointed out the United Nations issued a report last month finding that al-Qaida is present in at least 15 provinces in Afghanistan. And, further, the U.S. no longer has assets on the ground in the country to assess the terror threat.

At the Pentagon later Friday, spokesman John Kirby acknowledged that both al-Qaida and ISIS have a presence in Afghanistan, saying "we've talked about that for some time."

"We do not believe it is exorbitantly high, but we do not have an exact figure for you," he said, noting members don't carry membership cards.

"Our intelligence-gathering in Afghanistan isn't what it used to be, because we aren't there in the same numbers we used to be," he added.

Fox News national security and Pentagon reporter Jennifer Griffin noted to Kirby that the president "just said that there is no al-Qaida presence in Afghanistan."

"That does not seem to be correct," she said.

"What, what, what we don't think is that — what we believe is that there isn't a, a, a presence that is significant enough to, to merit a threat to our homeland as there was back on 9/11 20 years ago," Kirby replied.

'We got all kinds of cables'

Biden was asked to respond to the report Friday that the administration received a cable last month from the U.S. Embassy in Kabul warning of the impending fall of Kabul and advising that the evacuation of Americans begin Aug. 1.

The president argued he took the "consensus decision" that the fall of Kabul would not happen until later in the year.

Prior to the speech, which began nearly 50 minutes late, the White House said Biden would remain in Washington and not go to his home in Wilmington, Delaware, as had been scheduled. As the crisis developed over the past week, Biden was mostly in Wilmington and the Camp David presidential retreat.

Biden said he was unaware of any Americans having difficulty getting to the Kabul airport. However, the State Department – describing the Taliban's blocking of access to the airport as "congestion" – has warned Americans that the U.S. government "cannot ensure safe passage to the Hamid Karzai International Airport."

The department's updated guidance Friday said Americans should "use their best judgment getting to the airport" and warned that "airport gates may open or close without notice."

CNN correspondent Clarissa Ward reported Friday via Twitter: "We had difficulty getting to the airport... It's very difficult... and it is dangerous."

After Biden's address Friday, ABC anchor David Muir asked a reporter in Afghanistan if the president's claim squares with reporting on the ground.

"It just seems that the reality and the rhetoric are miles apart," the correspondent added.

"It just seems the reality and the rhetoric are miles apart," @IanPannell tells @DavidMuir.

"I'm not quite sure what advice the president is receiving. But the truth on the ground is that these people who are in fear of their lives can't get through." https://t.co/PCh0P9Jg9R https://t.co/xhbnbveuOO

Biden said troops are not expanding the security perimeter beyond the airport because of the possibility of "unintended consequences." U.S. officials said Friday the U.S. is relying on an agreement with the Taliban to allow safe passage of Americans.

Shortly after Biden's remarks, however, Defense Secretary Lloyd Austin said in a briefing call with House lawmakers that Americans have been beaten by the Taliban in Kabul, according to multiple people on the call.

Sen. Lindsey Graham, R-S.C., warned in a Fox News interview after the Biden address that thousands of Americans will be left behind unless the president orders that the full force of the U.S. military be made available.

Kabul airport today. Rumors that the Americans will take anyone that gets through so tens of thousands have arrived. pic.twitter.com/n9yKaf98TJ

"We know of no circumstance where American citizens, carrying an American passport, are trying to get through to the airport."

- Biden not even an hour ago https://t.co/rphobGryL0

Meanwhile the French, British and German militaries have deployed special forces beyond the perimeter to evacuate their citizens, the Washington Free Beacon reported.

Why are the French able to send their troops outside the airport perimeter to rescue their citizens, but the US is not?

CNN anchor Brianna Keilar reacted to Biden's claim Friday that the pullout was "not a failure" with a post of her conversation Thursday with Ward.

"I think a lot of people outside that airport, particularly those taking the kinds of extreme actions we're talking about, would like to know if this isn't failure, what does failure look like exactly?" Ward said.

Biden on Afghanistan pullout: "I don't think it was a failure"@clarissaward: I think a lot of people outside that airport, particularly those taking the kinds of extreme actions we're talking about, would like to know if this isn't failure - what does failure look like exactly? pic.twitter.com/t3CGgyMB6E

Among the intended evacuees, the Pentagon said, are 22,000 Afghan Special Immigrant Visa applicants to the United States who are to be housed at three military bases. Aid groups and some lawmakers want to considerably increase that number.

Biden defended his actions in an interview with earlier week with ABC's George Stephanopoulos.

"I don’t think it could've been handled in a way that -- we’re going to go back in hindsight and look, but the idea that somehow there was a way to have gotten out without chaos ensuing, I don’t know how that happens," Biden said.

Graham, R-S.C., has declared Biden should be impeached if Americans are left behind in Afghanistan.

Sen. Tom Cotton, R-Ark., said Biden's claim that there was no way to avoid the chaos is "a bald-faced lie."

"Joe Biden is as dishonest as he is impotent," the senator said.