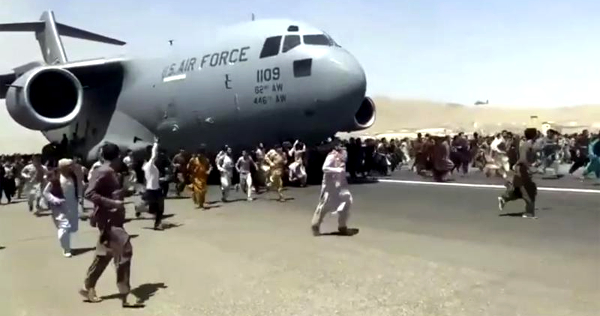 Desperate Afghans run alongside a U.S. Air Force C-17 transport plane as it rolls down the tarmac at Kabul's international airport on Aug. 16, 2021 (Video screenshot)

It won't be "America first" when it comes to evacuating people from Afghanistan amid the Taliban takeover, according to Pentagon spokesman John Kirby.

Kirby confirmed to Heinrich that the Defense Department will place 30,000 Afghan refugees with special immigrant visas at Fort McCoy in Wisconsin and Fort Bliss in Texas following the collapse of Kabul.

"Once we get more airlift out of Kabul, we’re going to put as many people on those planes as we can. There will be a mix ... not just American citizens, but perhaps some Afghan SIV applicants as well," said Kirby.

"We're going to focus on getting people out of the country, then sorting it out at the next stop. It’s not going to be just Americans first, then SIV applicants," he told Heinrich.

Kirby said the Defense Department wants "to have the capacity to get up to several thousand immediately, and want to be prepared for the potential of tens of thousands."

On Monday, thousands of desperate Afghans attempted to flee at Kabul's international airport. Videos on social media show people running across the tarmac as U.S. troops fired warning shots in the air. Another shows Afghans who had clung to a C-17 transport plane plunging to their death as it took off.

Desperate Afghans are hanging on the plane tires and falling from the sky near the Kabul airport pic.twitter.com/OhIscfDNWd

Democratic lawmakers and former Obama officials joined Republicans in criticizing Biden's handling of the situation. A former ambassador to Afghanistan under Obama, Ryan Crocker, said the Biden administration had "a total lack of coordinated, post-withdrawal planning" and is now suffering a "self-inflicted wound."

President Trump made the decision to withdraw troops, but critics focused on Biden's failure to evacuate the thousands of Afghans who assisted U.S. forces before the Taliban took over and the struggle to evacuate Americans.

"This is a crisis of untold proportions," said Rep Jackie Speier, D-Calif. "This is an intelligence failure."

Biden is scheduled to address the nation regarding Afghanistan at 3:45 p.m. Eastern Time on Monday.

Saigon? Oh, no, not like Saigon at all … https://t.co/6MdkfPnJRy

On Sunday, Secretary of State Antony Blinken told CNN the administration "can work with and recognize" a Taliban government that respects women and "doesn't harbor terrorists."

"Conversely, a government that doesn't do that — that doesn't uphold the basic rights of its people, including women and girls; that harbors terrorist groups that have designs on the United States or allies and partners — certainly, that's not going to happen," he said.

"If Sharia were as benign as Islamic spokesmen and Leftists in the West insist, no one would be desperately trying to get out of Afghanistan now," he wrote.

The Taliban is paying off military commanders to abandon their posts and surrender their cities, reports Hollie McKay, a foreign policy expert and war crimes investigator who covered war, terrorism, and crimes against humanity for Fox News Digital for more than a decade.

"The level of corruption within the Afghanistan military and the government, that's how the Taliban won a lot of this, is they would pay the commanders off to surrender a city before," she said in an Instagram interview with SmartHERNews host Jenna Lee Babin reported by PJ Media.

"So those who genuinely do want to fight — and there are a lot of men that wanted to genuinely fight — were kept in the dark and [Afghan National Army] commanders were basically paid off in advance to surrender the city and they were left with no choice but ‘you have no choice but to basically run,'" McKay said.

Reporter Lara Logan confirmed there are many Afghans who want to fight.

"I am in touch with Afghans who’re telling me about their sons fighting to the death, some executed at close range by the Taliban after running out of ammo," she wrote on Twitter. "Also Afghans in the Pansjir valley are still fighting now & have not surrendered. It is not true that all chose not to fight."

Fox News noted, amid the Taliban's swift takeover, that for years, American generals have claimed that Afghan forces were developing an ability to handle themselves against the Taliban.

"The Afghan army is increasingly effective," Gen. James Mattis told Congress in July 2010 at his confirmation hearing when he was nominated for commander of U.S. Central Command.

He said the Afghan military – alongside U.S. forces – were "the worst nightmare for the Taliban."

CNN REPORTER ON TALIBAN: "They're just chanting 'death to America,' but they seem friendly at the same time."

The same reporter then says the Taliban have a "welcoming spirit" as they wave rifles in the air.

Yes, this is a real clip. pic.twitter.com/VdXWplr8V2

WATCH: MSNBC reports it's been a 'relatively peaceful' takeover of Afghanistan by the Taliban https://t.co/L1tAcG6ZcI