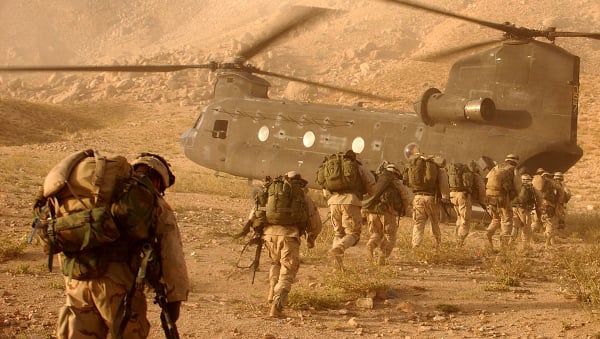 Soldiers march to the ramp of a CH-47 Chinook helicopter that will return them to Kandahar Army Air Field on Sept. 4, 2003.
(U.S. Army photo by Staff Sgt. Kyle Davis)

Conflicting with President Biden's insistence that he had no intelligence indicating Kabul would quickly fall upon the U.S. withdrawal from Afghanistan, Secretary of State Anthony Blinken received a cable in July urging that evacuations be accelerated because the Taliban was quickly gaining ground and the capital was vulnerable to collapse.

The Wall Street Journal reported the July 13 confidential memo, signed by 23 staffers at the U.S. Embassy in Kabul, urged the administration to begin evacuating people from the country no later than Aug. 1.

President Biden claimed in an interview with ABC News released Thursday he was never informed that a rapid collapse was possible. He told reporters on July 8 it was "highly unlikely" the Taliban would take control of Afghanistan.

The Journal reported a person familiar with the matter said Blinken reviewed the cable.

Disputing Biden's claim, former CIA analyst Douglas London said the agency had assessed that a rapid collapse was possible. And the information was briefed to Biden and Trump officials.

"Ultimately, it was assessed, Afghan forces might capitulate under the circumstances we witnessed, in projections highlighted to Trump officials and future Biden officials alike," London wrote on the Just Security website.

London, who served as the CIA's counterterrorism chief for South and Southwest Asia, was a volunteer adviser to the Biden campaign after leaving the CIA in 2019.

He described the president's claim that the situation in Afghanistan deteriorated more rapidly than expected as "misleading at best."

"The CIA anticipated it as a possible scenario," London said.

Speaking to George Stephanopoulos of ABC News, Biden said he had no warning from the intelligence community.

"Number one, as you know, the intelligence community did not say back in June or July that, in fact, this was gonna collapse like it did," he said.

Stephanopoulos pressed for more: "They thought the Taliban would take over, but not this quickly?"

Biden answered: "But not this quickly. Not even close."

The president also said he couldn't recall senior Pentagon officials advising him to maintain a military presence in Afghanistan.

Art Moore
Art Moore, co-author of the best-selling book "See Something, Say Nothing," entered the media world as a PR assistant for the Seattle Mariners and a correspondent covering pro and college sports for Associated Press Radio. He reported for a Chicago-area daily newspaper and was senior news writer for Christianity Today magazine and an editor for Worldwide Newsroom before joining WND shortly after 9/11. He earned a master's degree in communications from Wheaton College.
@@arthurdmoore
FBI 'meetings' led to Twitter's censorship of Hunter laptop story
Thought Police alarm: U.S. urges you to confront friends' 'misinformation'
Look who's using TikTok to interfere in U.S. elections
N95 mask study undermines feds' COVID narrative
Prosecutor: Bible passage 'no longer appropriate in modern society'
See more...