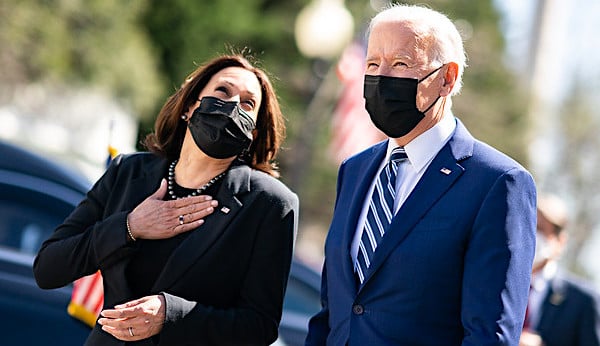 Fox News on Friday charged that Joe Biden's presidency was "teetering." Another report said he soon would "face accountability" for the catastrophe in Afghanistan.

That's where Biden ordered the U.S. military to withdraw and it took only 11 days for the terrorist Taliban organization to take control. The U.S. now is struggling, and likely will not succeed, in getting all Americans and U.S.-supporting Afghanis out of the country before the terrorists' deadline of August 31.

And of course there have been reports the radical Muslims already have started hunting down and executing those who oppose them.

Fox pointed out that both Republicans and Democrats were attacking Biden for his strategy that already has resulted in the deaths of at least 13 American service members, victims of a terrorist's bomb on Thursday.

Calls were coming fast and furious for him to resign, or be impeached, or something.

Biden’s physical inability to lead is not a political talking point – it’s a demonstrable fact.

Joe Biden is not mentally fit to serve as President of the United States.

I truly believe that he is unable to discharge the duties of the office he holds. pic.twitter.com/exu9QM5NRH

Some even went further, with Rep. Madison Cawthorn charging that Biden, long known for his gaffes, bumbles and stumbles, is getting so bad that he should be removed via the 25th Amendment, a process installed to deal with the situation of an incapacitated president.

Cawthorn explained, "When I look to our commander in chief, I do not see someone who maliciously makes poor decisions. Yet we see today … American carnage as a result of his inept and incompetent actions.

He said Biden's "mental decline" is on full display, with even "our enemies now see it."

"Although it is clear to me that we could not continue to put American servicemembers in danger for an unwinnable war, I also believe that the evacuation process appears to have been egregiously mishandled," Rep. Susan Wild, D-Pa., said on social media. "In order to move forward, we need answers and accountability regarding the cascading failures that led us to this moment."

Rep. Tom Rice, R-S.C., no fan of President Trump as he voted for the failed effort to impeach and remove Trump earlier, said, "Well Joe, you’ve proven yourself incapable of handling your job as commander in chief. You ignored your advisors, rushed this haphazard withdrawal without appropriate conditions and before evacuating our citizens and friends. Your ineptitude has now cost at least 12 American lives. All options are on the table to hold President Biden accountable for this tragic chain of avoidable events… Resign and turn the job over to someone who can handle it."

Even without an impeachment, which is improbable with Democrats in the majority in Congress now, members of Congress are promising they will investigate what he's doing.

Rep. Kevin McCarthy, R-Calif., the House Minority leader, promised, "Once we can confirm the safety of our citizens, my next objective is to ensure we have accountability for the grave mistakes that have been made by this administration and the leadership at the Department of Defense which have created one of the biggest foreign policy failures in decades."

He insisted Biden will have a "reckoning."

Former President Trump, who was targeted twice by failed Democrat impeach and remove strategies, described how America has been made to look "weak" and "pathetic" under Biden.

A commentary at The Hill described Biden's "weak leadership" as the top national security threat to America right now.

Others weren't as gentle, with Stefanik explaining Biden has "blood on his hands" from the slaughter of 13 American service members by a terrorist's bomb in Kabul.

Cawthorn continued, "It is a demonstrable fact, our president is not mentally fit to serve as president of these United States.

"I truly believe that he is unable to discharge the duties of the office he holds. That is why today, I sent letters to each member of the president’s cabinet, and to the vice president, asking that they invoke the 25th Amendment of The United States Constitution, and remove Joe Biden from his office. I’m also calling on speaker of the House, Nancy Pelosi to immediately call Congress back into session to construct a disability review Council and assess the president’s state. I cannot sit idly by and watch the nation that I love spiral into death and devastation, because our leader cannot discharge his duties. When there is no time to wait, the time for action is now. I take no pleasure in sending this request, the gravity of this weighs heavily on me, but I find no other recourse."

Biden's ability to handle the duties of president came frequently under question during the campaign, when he mostly hunkered down in his home and rarely ventured on the campaign trail. Concerns have only increased since he took office, with multiple exhibitions of an inability to finish a sentence.

He's been carrying notes with instructions with him recently on what to say, and revealed this week he was "instructed" which reporter to call on at a news conference.

Sen. Josh Hawley, R-Mo., said Biden "must resign" because the deaths of American service members in Afghanistan "is enraging. And Joe Biden is responsible."

To say that today’s loss of American lives in Kabul is sickening does not begin to do justice to what has happened. It is enraging. And Joe Biden is responsible. It is now clear beyond all doubt that he has neither the capacity nor the will to lead. He must resign

Rep. Jeff Duncan, R-S.C., said he has co-sponsored articles of impeachment against Biden

"I am heartsick at the president’s failure to fulfill his duty that has resulted in American deaths and thousands of Americans and Afghan allies being abandoned at the risk of being tortured, captured, held hostage, or killed at the hands of the Taliban or other terrorist forces," he said. "Our commander-in-chief showed reckless disregard for both American citizens and allies in neglecting to secure their safe evacuation from Afghanistan once he withdrew our troops. The president promised to preserve, protect, and defend the Constitution of the United States, but it is evident the president has failed to fulfill this charge."

Thank you @RepJeffDuncan for cosponsoring my articles of impeachment against Joe Biden related to Afghanistan.

It’s time for Congress to hold this administration accountable.

Joe Biden must be impeached. Immediately.

Resignation is unlikely at best, and impeachment is virtually a non-starter with Democrats holding the reins in both the Senate and House right now.

However, that could change significantly as early as the elections a little over a year from now.