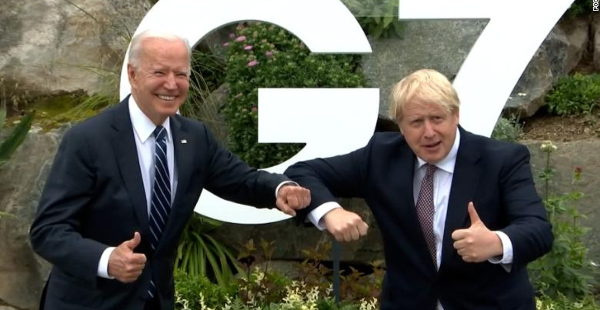 President Biden promised key leaders at the Group of Seven summit in June that the U.S. would maintain enough of a security presence in Afghanistan to ensure they could continue to operate in the capital following the main U.S. withdrawal, according to a British diplomatic memo viewed by Bloomberg News

Biden made the vow before the Taliban's rapid final push across Afghanistan.

At the summit in Cornwall, England, Biden assured British Prime Minister Boris Johnson and other leaders that "critical U.S. enablers" would remain in place to keep Kabul safe after the U.S. troop withdrawal.

According to the note, Bloomberg reported, British officials determined the U.S. would provide enough personnel to ensure that the British embassy in Kabul could continue operating.

Now, with the swift Taliban takeover, the British embassy has been evacuated and the U.S. Embassy is closed.

Meanwhile, the Wall Street Journal reported Friday that the administration received a cable last month from the U.S. Embassy in Kabul warning of the impending fall of Kabul and advising that the evacuation of Americans begin Aug. 1.

Ask to respond the report following his address to the nation, Biden said, "We got all kinds of cables, all kinds of advice."

The president argued he took the "consensus decision" that the fall of Kabul would not happen until later in the year.

Bloomberg noted in its report Friday that the U.S. allies discussed in June with Biden at the G-7 summit and later at the NATO summit a few days later the need to continue supporting the government in Kabul to prevent Afghanistan from once again becoming a terrorist haven.

At that time, the European Union's top diplomat, Josep Borrell, was warning Secretary of State Antony Blinken that withdrawing troops from Afghanistan risked giving the Taliban the upper hand.

Such a shift, Borrell said, could pose a direct threat to European security.

Friday at the White House, Biden insisted al-Qaida is gone from Afghanistan.

However, the United Nations issued a report last month finding that al-Qaida is present in at least 15 provinces in Afghanistan. And, further, the U.S. no longer has assets on the ground in the country to assess the terror threat.

At the Pentagon later Friday, spokesman John Kirby acknowledged that both al-Qaida and ISIS have a presence in Afghanistan, saying "we've talked about that for some time."

"We do not believe it is exorbitantly high," he said of the number of terrorists, "but we do not have an exact figure for you," arguing al-Qaida operatives don't carry membership cards.

"Our intelligence-gathering in Afghanistan isn't what it used to be, because we aren't there in the same numbers we used to be," he added.

Fox News national security and Pentagon reporter Jennifer Griffin noted to Kirby that the president "just said that there is no al-Qaida presence in Afghanistan."

"That does not seem to be correct," she said.

"What, what, what we don't think is that — what we believe is that there isn't a, a, a presence that is significant enough to, to merit a threat to our homeland as there was back on 9/11 20 years ago," Kirby replied.