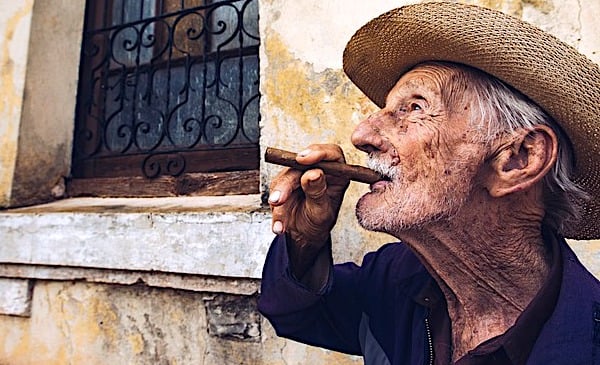 “The president has been incredibly clear: the Cuban people are crying out for freedom, and the United States will continue to stand with them and hold Cuban officials accountable for their abuse of human rights,” DNC Chairman Jaime Harrison said in a statement Monday.

But outside the White House on Sunday and Monday, thousands of protesters waving Cuban flags and signs emblazoned with “S.O.S. Cuba” were sending the opposite message. The administration is missing in action, they argued, and needs to do far more to ramp up pressure on the communist regime.

The administration’s response to the largest uprising in the island nation’s 62 years of communist rule is creating international confusion about how U.S. allies should respond, activists tell RealClearPolitics.

Since protesters took to the streets in Cuba two weeks ago, chanting “freedom” and calling on President Miguel Diaz-Canel to step down, hundreds of them have been beaten or arrested and at least one has died, according to human rights activists. But there has been no crack in the Cuban government’s authoritarian response, and support for the Cuban people from the U.S.-led coalition isn’t likely to produce a change in the regime’s tactics. The coalition, critics complain, lacks the most influential countries in the region.

“The Cuban people appreciate the support of responsible and freedom-loving nations. Noticeably absent [are] the Communist Party’s main economic enablers in the Americas and Europe, particularly Mexico, Canada and Spain,” said Jason Poblete, president of the Global Liberty Alliance (an international human rights organization) and the son of Cuban immigrants.

The show of international support follows a new round of Biden administration sanctions targeting specific members of the communist government responsible for ordering the violent crackdown. The administration argues it’s doing all it can without sparking a broader international conflagration. Four days after the protests began, Biden surprised many in his party by publicly denouncing Cuba, calling it a “failed state” and communism in general a “failed system.”

But the administration’s slow actions — the sanctions came nearly a week and a half after the protests began — have many human rights activists and the all-Republican Cuban American delegation in Congress increasingly worried that a pivotal opportunity will soon be lost.

On Monday, Florida Sen. Marco Rubio, along with a group of 18 other GOP lawmakers, signed a letter to Biden requesting a meeting to discuss next steps. The lawmakers, including Minority Leader Kevin McCarthy, urged the president to work with Congress “to bring an end to the oppressive communist regime in Havana and liberate the Cuban people.”

“Now is the time to act,” they urged, expressing concern that this window for change on the island “is being squandered by indecision, bureaucracy and a failure to lead.”

Rubio has urged Biden to back up his calls for the Cuban government to allow the Inter-American Commission on Human Rights, or IACHR, to investigate human rights violations in Cuba since the crackdown. (The IACHR is an arm of the Organization of American States, a regional forum for policy and decision-making in the Western Hemisphere.) Rubio would also like to see the administration push Cuba to allow access to the International Committee of the Red Cross to deliver humanitarian aid and for the U.S. to convene an emergency meeting of OAS’ standing council.

More broadly, Rubio and several other Cuban American lawmakers have urged Biden to act swiftly to provide consistent and reliable Internet to the Cuban people after the government shut it down in the first days of the protests. Access has reportedly been restored, though it remains spotty in places.

“The White House can do two things: rally the international community and turn on the Wi-Fi,” Rep. Maria Elvira Salazar, a Florida Republican, told the crowd protesting outside the White House on Monday. But restoring consistent Internet access on the island is proving far more difficult than flipping a switch, according to numerous sources familiar with the process. It’s also complicated by a previous failed U.S. attempt to furtively expand telecommunications when Alan Gross, a U.S. government contractor, was arrested in Cuba in 2009. He was prosecuted in Havana for trying to bring in military-grade communications equipment designed to evade government detection. President Obama secured his release in late 2014 in exchange for three Cuban spies being held in the U.S.

Despite the obvious hurdles, Biden has said he wants to work with Congress to review whether the United States can help Cubans regain Internet access as Rubio and others have escalated their calls for immediate action.

A State Department spokesperson reiterated that pledge to RCP.

“The entire United States government supports unrestricted access to the global open, interoperable, reliable and secure Internet and condemns actions by the Cuban government to restrict and limit access to the Internet and all forms of telecommunications,” the spokesperson said. “…We call on Cuba’s leaders to reinstate all Internet and telecommunications services. The administration is working closely with the U.S. Congress and key stakeholders to identify viable options to make the online accessible more available to the Cuban people.”

But over the last two weeks, Rubio has repeatedly argued for what he views as simpler solutions.

“There are two ways to help the people of Cuba get around the regime’s [I]nternet blockade,” the two-term senator tweeted Thursday. “We can immediately fund access to a proven VPN provider. Long term we can provide satellite/cell service from balloons and other methods. @POTUS we should do both ASAP.”

Sen. Bob Menendez, another prominent Cuban American and the chairman of the Foreign Relations Committee, has since poked holes in Rubio’s balloon proposal. “I’m all for creating Internet access in Cuba in a way that will work, that the regime will have the hardest time jamming,” he told the website LatinoRebels.com. “If you have balloons, it has an omnidirectional signal. I know the balloon is there. I know the signal comes down. I block it.”

Rubio and other GOP lawmakers have pointed to Project Loon, an experiment by Alphabet Inc., Google’s parent company, to provide Internet access to remote areas around the world via balloons. It was discontinued in January.

Rubio has cited such an approach’s use in the aftermath of Hurricane Maria, when Puerto Rico was able to gain Internet access through the balloon technology. But Alphabet had U.S. permission to fly its balloons in Puerto Rican airspace back then; now it lacks any such permission from the government in Havana.

Nonetheless, Rubio’s goal remains to make sure the Cuban people can log on the Internet. “That might be through satellite. It might be another way,” he said. “I’m not a technologist. We’re working on it.”

Several human rights organizations say the impasse over Internet access demonstrates why the U.S. should be investing far more in technologies to aid dissident communities living under numerous repressive regimes, including in China and Iran.

“Cuba is a perfect example of where a small investment by the U.S. government in Internet freedom could open up an entire society,” Katrina Lantos Swett told RCP. Lantos Swett is the president of the Lantos Foundation for Human Rights and Justice and a former chair of the Commission on International Religious Freedom. She is also the daughter of the late-Rep. Tom Lantos, a long-serving Democrat from California and the only Holocaust survivor ever elected to the House.

“Internet freedom is truly the next frontier of human rights, and Cuba’s relatively small footprint and population would make any investment there a game changer,” she added. “It would also send an important signal to other authoritarian regimes around the world that continue to control their country’s Internet access that change is coming.”