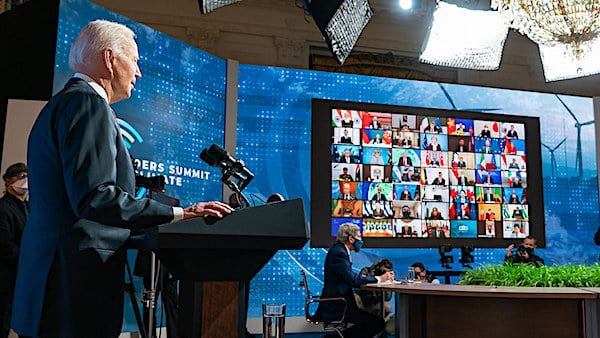 Just a year ago, Dr. Anthony Fauci was widely regarded as a wise, warm, grandfatherly medical expert whom Americans could trust to guide them safely through a frightening pandemic. Today, we know that besides ushering in the catastrophic long-term national lockdown based on absurdly flawed computer modeling, changing his positions on almost everything, and increasingly flat-out lying, Fauci ignored the U.S. government’s own ban on funding dangerous “gain of function” research and recklessly sent American taxpayers’ hard-earned money to the Wuhan Institute of Virology to fund Frankenstein-type experiments to make bat coronaviruses more dangerous to humans. That is literally true.

As U.S. Sen. Rand Paul, a medical doctor himself, recently concluded: “Fauci could be culpable for the entire pandemic.”

But that’s not the only, nor even the most bizarre, truth now emerging with regard to the plague that, by all indications, has profoundly changed America and the world, perhaps forever.

It’s hard to even quantify just how perverse the current official response to COVID-19 truly is. Remember, we’re talking about the “Biden-Harris administration,” where federal policy on every major issue is destructive, deadly and insane. So why should COVID be any different?

After all, today’s ruling Democrats literally created a horrendous national crime wave by idiotically “defunding” America’s police, encouraging riots, decriminalizing shoplifting, releasing dangerous criminals from prison, and refusing to prosecute violent offenders. They are also in the process of permanently replacing our nation’s population with millions of illegal aliens, many infected with COVID-19, in hopes they’ll become Democrat voters. And of course, they just gave a huge booster shot to Islamic jihad worldwide with their ignominious, Saigon-style summary withdrawal from Afghanistan.

In addition, our ruling elites are simultaneously creating ruinous inflation by "printing" trillions of new dollars to fund incomprehensively expensive and corrupt socialist spending programs. They’re destroying women’s sports by forcing women and girls to compete with men who think they’re women. And they’re brainwashing America’s children to hate their own country – and each other – by indoctrinating them with toxic Marxist doctrines like Critical Race Theory. And so on.

Yet, arguably more damaging and destructive than all of these, at least in terms of actual human death and suffering, has been the ruling elite’s policies with regard to COVID-19.

Americans are just starting to discover that most of what they thought they knew about the pandemic has been not just a lie, but in many cases a Big Lie – the exact opposite of the truth, intentionally meant to deceive and manipulate entire populations.

The first lie to fall was that an entire healthy society should be locked down – quarantine not just the sick and vulnerable, but everybody, including those with virtually zero risk from the virus. This radical departure from previous public health practice prolonged the pandemic by delaying the necessary attainment of herd immunity, crushed America’s booming Trump economy with millions losing their jobs and businesses, and forced little children to wear masks in the classroom and on the playground, or stay home from school altogether. The entire nation still lives in fear. Suicide, depression, drug addiction, alcoholism, crime – have all skyrocketed.

Moreover, the radical national lockdown enabled the far left to ride the wave of COVID chaos to shield what were hands-down the worst presidential and vice-presidential candidates in American history, Joe Biden and Kamala Harris, from any real scrutiny, and then to corrupt the 2020 election and ultimately install a ruling regime of deranged leftwing revolutionaries untethered to reality, history, the Constitution, Judeo-Christian values, reason, decency, love or basic sanity.

Then, just recently, most Americans finally learned that what Democrats, Big Tech, Big Media, Big Medicine and Big Fact-checkers had censored and mercilessly ridiculed for more than a year as a rightwing, racist, Trumpian conspiracy theory – namely, that the SARS-CoV-2 virus was actually created in a U.S.-funded level-4 biolab in Wuhan, China staffed with Chinese military personnel, and didn’t spontaneously jump species from a bat in a nearby “wet market” – turned out to be true.

If that isn’t surreal enough, there’s the elite class’s maniacal obsession with forcing every living human being to be injected with an experimental messenger-RNA gene therapy, which they call a “vaccination,” despite an unprecedented lack of safety data and – as of this writing – more than 12,000 American deaths reported after receiving the mRNA jab. Also 1,381 miscarriages, 5,236 heart attacks, 4,044 cases of Bell's Palsy, 4,759 cases of anaphylaxis, 3,728 cases of myocarditis and pericarditis, 14,251 people permanently disabled, and over 200,000 trips to the hospital, urgent care of doctors' offices as a result. Other than that, as Biden has assured Americans regarding the COVID jabs: “The bottom line is this – I promise you: They are safe. They are safe. And even more importantly, they’re extremely effective.”

It gets more surreal by the day: Pregnant women, who normally are advised not to put anything even possibly pathogenic into their bodies during their first trimester – even to refrain from drinking wine or eating certain soft cheeses – are now being advised by the head of the CDC to inject a powerful, experimental, little-understood and potentially gene-altering drug into their bodies and that of their developing babies. And 2- and 3-year-olds are now forced to wear masks when it is established beyond doubt that they have essentially zero risk of either contracting or transmitting COVID, yet are damaged physically, mentally and emotionally by being forced to wear a mask all day long in school.

Likewise, our medical bureaucracy bizarrely refuses to acknowledge that natural immunity from a COVID-recovered person is superior in every way to the immunity conferred by any of the current mRNA vaccines. Natural immunity is more robust, longer-lasting and broad-spectrum (i.e., effective against COVID variants) than the mRNA vaccines that were manufactured to work on the original SARS CoV-2 virus that came from China. Worse, there is evidence that the COVID-fighting antibodies present in a COVID-recovered person renders that person – who already has no need whatsoever to be vaccinated – even more likely to suffer ill effects from getting the vaccine than others! Repeat: The COVID-recovered don’t need the vaccine because they already possess superior immunity, but if they do get the vaccine – which they are being mercilessly pressured to do to return to college, keep their job, and so on – they’re more likely to suffer negative effects.

These and other emerging realities are leading many thoughtful Americans to the conclusion that their leaders absolutely are not on their side. And they are right.

Now believe it or not, there is something even more shocking and inexcusable than all of the preceding COVID lies: The intentional suppression of well-documented, safe, effective and inexpensive early treatments for COVID-19 that could – and would – have saved hundreds of thousands of American lives. That is the considered conclusion of countless frontline COVID-treating doctors in the U.S. and around the world.

Repeat: Safe and effective treatment for COVID-19, which would allow the infected to be treated at home with inexpensive, widely used medications approved for decades by the FDA as safe, and thereby avoiding massive hospitalization and death, has been intentionally suppressed and demonized. Even online discussions about these medications have been largely banned, suppressed or “fact-checked” out of existence by social media for more than a year. Don’t even think of trying to find any of this on Google.

Instead of treating COVID-19 early, when it is by far the most manageable, the entire thrust of the elites’ COVID policy has been to quarantine/lockdown everybody and everything in the country – actually the whole world – a surefire recipe for economic and social disintegration of societies (making them ripe for “fundamental transformation,” aka “The Great Reset”) while waiting for a vaccine. Unfortunately, as most people now realize, the mRNA vaccines are extremely flawed – a reality that is becoming more and more painfully evident with every passing week. Yet, despite the huge numbers of reported adverse events and deaths following mRNA vaccination, authorities are still maniacally pushing for everyone to get the jab.

Fortunately, there is an entire underground of frontline medical doctors across the U.S. who are daily treating those infected with SARS-CoV-2 and also prescribing prophylaxis – medicines like hydroxychloroquine and ivermectin as well as over-the-counter supplements, taken to prevent infection in the first place. Indeed, taking these meds and supplements is precisely how many frontline doctors who treat COVID-19 patients daily avoid becoming infected themselves.

A recent issue of Whistleblower magazine, which I have edited monthly for over two decades, offers real hope, as well as practical, vital and life-saving information to Americans who have been forced to live in fear, isolation and hardship – and subject to nonstop disinformation – throughout the pandemic, and who are looking for some real light at the end of this long dark tunnel. I urge you to check it out.

IMPORTANT NOTE: “ENDING THE PANDEMIC: How vaccine mania and lust for power led to the all-out suppression of proven safe-and-effective COVID treatments” – although sold out in its print edition due to overwhelming demand – is available in Whistleblower’s popular, state-of-the-art digital form!

Better yet, SUBSCRIBE TO WHISTLEBLOWER (print edition) and get 12 powerful monthly issues mailed to you – including the sensational current issue, “YES, THE 2020 ELECTION WAS STOLEN: How Big Tech, Big Media, lying Democrats, deep staters and vote fraudsters cheated Trump” – and America” – plus you’ll get three FREE digital special issues, including “ENDING THE PANDEMIC”!

David Kupelian
David Kupelian is an award-winning journalist and bestselling author of "The Marketing of Evil," "How Evil Works" and “The Snapping of the American Mind.” Follow him on Facebook.
Hope in a hopeless world
An inspired alternative to today's corrupt, dishonest and deranged 'news media'
Restoring election integrity: The one and only way to save America from tyranny and destruction
Biden's monumental game of Chicken
How the 2020 election was stolen from Donald Trump
See more...