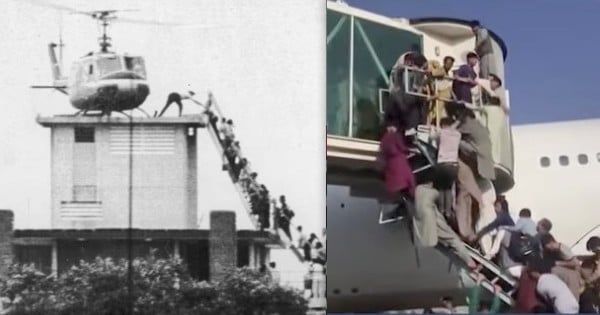 A Democratic senator compared the scene in Kabul as the U.S. rushed to evacuate embassy personnel and Afghan allies to the fall of Saigon in 1975 on Monday.

“Sad. My father was our next-to-last ambassador in Saigon, and our ambassador when ‘peace deal’ was negotiated in Laos,” tweeted Sen. Sheldon Whitehouse of Rhode Island. “How that all ended deserved more attention.”

Two years after withdrawing troops from Vietnam, former President Gerald Ford ordered the evacuation of Americans from Saigon, along with South Vietnamese allies, as the city fell to the North Vietnamese faster than anticipated.

It took 80 helicopters over 19 hours to evacuate Saigon, with thousands of Vietnamese civilians climbing the walls of the U.S. embassy with the hope of getting onto one of those helicopters.

Though embassy staff in Saigon processed visas, the order eventually came to “stop loading so many Vietnamese and to get the remaining Americans out fast. It limited the number of helicopter flights that would be sent into the embassy area from carriers off-shore and politely suggested to the ambassador that he be on one of those,” The Washington Postreported at the time.

“The unmitigated disaster in Afghanistan — the shameful, Saigon-like abandonment of Kabul, the brutalization of Afghan women, and the slaughter of our allies — is the predictable outcome of the Trump-Biden doctrine of weakness,” Republican Sen. Ben Sasse of Nebraska said in a statement.

“It’s a very dire situation when you see the United States Embassy being evacuated. In fact you just had President Biden a few days ago saying you wouldn’t see helicopters evacuating the embassy like Saigon, and yet here we are,” House Minority Whip Steve Scalise said on CBS’s “Face the Nation” Sunday. “This is President Biden’s Saigon moment and unfortunately it was very predictable.”

Members of the media have also drawn parallels to Saigon, CNN’s Jim Acosta noting that if the two events are put “side by side, it does appear to be a just comparison.”

Biden said there was “zero” chance that the withdrawal of U.S. troops from Afghanistan would create a second Saigon back in July. “There’s going to be no circumstance where you see people being lifted off the roof of an embassy in the — of the United States from Afghanistan. It is not at all comparable,” he said.

“This is manifestly not Saigon,” Secretary of State Antony Blinken said on ABC’s “This Week” on Sunday. “In terms of what we set out to do in Afghanistan, we’ve done it.”