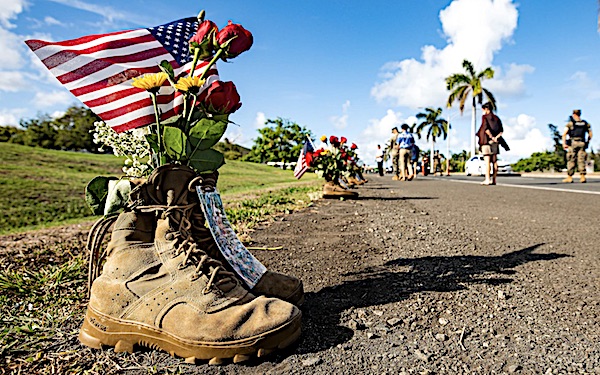 A pair of boots is displayed as part of a memorial at Marine Corps Base Hawaii, Aug. 29, 2021, in remembrance of the 13 service members killed Aug. 26 in Afghanistan. The memorial, comprised of community donations, was displayed at the entrance of MCBH. (U.S. Marine Corps photo by Lance Cpl. Samantha Sanchez)

Facebook says it incorrectly removed the account of the mother of one of the Marines killed in the Kabul terrorist attack last week, following several posts critical of President Joe Biden.

“As soon as I posted about what happened to my son Instagram started pulling up my posts from months ago and sending me notifications that if I kept posting stuff like that they would disable my account,” Chappell wrote, posting a screenshot last week allegedly showing a notice from Instagram informing her one of her posts had been flagged.

Chappell had previously posted criticism of Biden on both Instagram and Facebook, describing him as a “weak human being” and a “traitor.” An Instagram post last week called Biden an “absolute disgrace” and urged his impeachment.

“You are not the president of the United States of America Biden!!!! Cheating isn’t winning!!! You are no leader of any kind,” Chappell wrote Monday.

Facebook confirmed to the Daily Caller News Foundation it temporarily removed her account, but did not say whether it had flagged any of her posts.

“We express our deepest condolences to Ms. Chappell and her family. Her tribute to her heroic son does not violate any of our policies,” a Facebook company spokesperson told the Daily Caller News Foundation. “While the post was not removed, her account was incorrectly deleted and we have since restored it.”

Chappell also posted on Aug. 26 that she had been banned for 30 days from Facebook. Both her Instagram and Facebook accounts appeared to be active as of Tuesday afternoon.

Chappell did not immediately respond to the Daily Caller News Foundation’s request for comment.

WND News Services
These reports are produced by another news agency, and the editors of WND believe you'll find it of interest.
Pope Francis denies he is planning to resign soon
Parade 'shooter' who killed 6 arrested, had posted videos before massacre
'Sesame Street' pushes COVID shots for kids
Drowning in trash: Israel running out of landfill space
Biblical worldview, support of Israel waning among evangelical college students
See more...