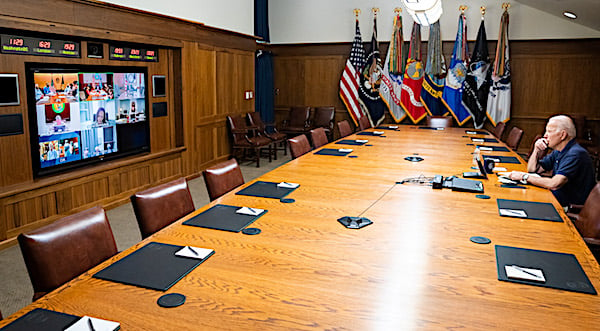 President Joe Biden sits alone as he meets with his national security team and senior officials by video to hear updates on the draw down of U.S. civilian personnel in Afghanistan and the ongoing security situation in Kabul, Afghanistan. Sunday, Aug. 15, 2021. (Official White House photo)

An online posting that looks closely at a recent image released by the White House – of Joe Biden in a situation room, sitting alone at a large table, with a series of screen images on the monitor on the wall, is raising questions about photoshopping.

And other assorted tricks.

It is Citizen Free Press that has posted several images, and pointed out that there is a problem.

Under the headline, "Did the White House use photoshop in Biden image?" the commentary openly wonders how much about the image is accurate. 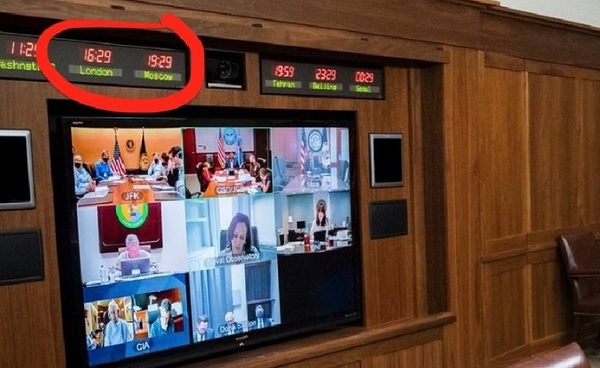 Of course the two cities are not in the same time zone.

Is the photo of Joe Biden accurately depicting events involving Afghanistan at the time purported by the White House?
7% (81 Votes)
93% (1116 Votes)

Nor are they three hours apart, the Citizen Free Press explained.

"Moscow will not be three hours different than London until November 7, 2021," the report explained.

Is this a stock photo? pic.twitter.com/f7RPFzvKF8

The original statement from the White House, dated Sunday, said, "This morning, the president and vice president met with their national security team and senior officials to hear updates on the draw down of our civilian personnel in Afghanistan, evacuations of ... applicants and other Afghan allies, and the ongoing security situation in Kabul."

But the attached image showed only Biden.

Hi, @WhiteHouse, can you please explain why the clocks above the television show Standard Time rather than Daylight Savings Time? Moscow will not be three hours different than London until November 7, 2021. This isn't a pre-March picture that's Photoshopped, is it? https://t.co/Ykv5QVT1ca

Which triggered online commenter, an anonymous "Aldous Huxley's Ghost," to ask, "Hi, @WhiteHouse, can you please explain why the clocks above the television show Standard Time rather than Daylight Savings Time? Moscow will not be three hours different than London until November 7, 2021. This isn't a pre-March picture that's Photoshopped, is it?"

The commenter also pointed out that the screens that illuminate when the president's microphone is on were unlit, meaning if Biden was interacting with others electronically, he wasn't being allowed to speak to them.

Commentator Jack Posobiec wondered, "Guys I'm starting to think the government has been lying to us this whole time."

One other commenter delivered, however, a logical explanation about why there would be any sort of need to make it appear Biden was where he actually was not.

"You're all criticizing without understand the situation: Biden has to use his vacation days or he loses them."