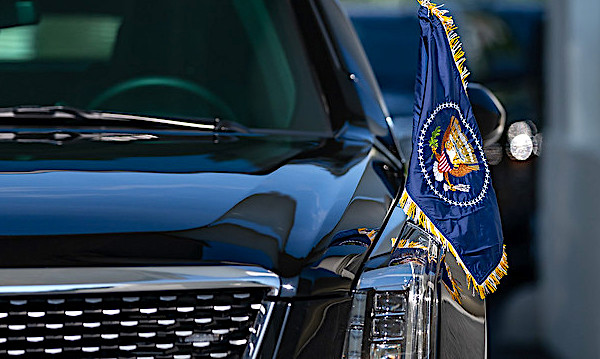 The flag of the president is displayed on the presidential limousine Friday, May 28, 2021 as it awaits President Joe Biden and First Lady Jill Biden for a trip to Alexandria, Virginia. (Official White House photo by Carlos Fyfe)

U.S. Rep. Mo Brooks, R-Ala., has outlined three options for President Biden, given his declining mental capabilities and the resulting catastrophe in Afghanistan that has allowed terrorists to take over billions of dollars of American war machinery and kill Americans.

All involve his departure from the White House.

Brooks, who is running for the U.S. Senate in Alabama in 2022, said Biden must resign over the Afghanistan disaster.

Or he should be removed under the 25th Amendment provision addressing incapacitated presidents.

Or he should be impeached.

"President Joe Biden has proven himself to be a complete and total fiasco. The horror of dead American military personnel giving their lives in defense of a botched Afghanistan withdrawal is Joe Biden’s pinnacle of incompetence," his statement said.

"As such, President Biden should, in the name of honor, resign as president of the United States. America needs a president who shows strength and competence in the face of dictatorial geopolitical adversaries. Time and time again, President Biden has shown the strength of a marshmallow and the intellectual capacity and judgment of a gnat. America, and the free world, simply cannot afford the risks of such a vacuous man in the office of president of the United States."

The congressman said a resignation would be the honorable thing.

Failing that, "Vice President Harris should initiate efforts to remove President Biden pursuant to the 25th Amendment to the Constitution. There was a time when Joe Biden had a keen mind and was capable of weighing myriad facts to reach sound judgments. Unfortunately, those days are long gone. Joe Biden’s mental capacity has significantly eroded and President Biden simply lacks the mental capacity needed to be an effective leader of the free world."

If Harris refuses to act, Brooks said, "Congress must initiate an impeachment investigation to determine whether President Biden should be impeached for 'treason, bribery, or other high crimes and misdemeanors.'"

He cited Biden's decisions that transferred "an advanced American weaponry to the Taliban and other terrorist entities, all of whom have been and are enemies of the United States."

He also cited Biden's failure to abide by the Constitution's requirement that the federal government shall "protect [states] against invasion," with his immigration policies that have created crisis after crisis at the nation's southern border.

"President Biden is actively aiding, abetting and coordinating an ‘invasion’ across America’s porous southern border into Texas, New Mexico, Arizona, California and the rest of America, and, as such, President Biden’s southern border abdication should be fully investigated to determine whether it, too, is an impeachable offense."

"President Biden has failed as commander-in-chief. President Biden is unable to meet the challenges of a president of the United States. He is mentally unfit to hold the presidency," Brooks said.