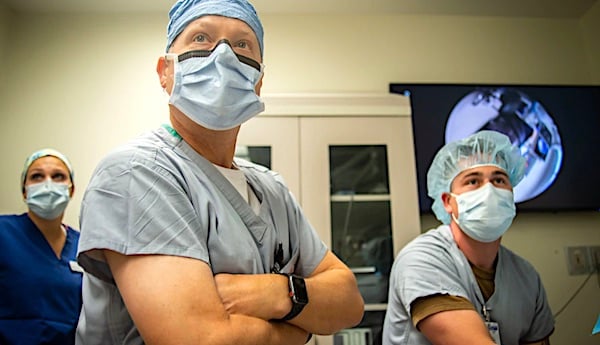 A new report from Jason Rantz, a talk-show host on 770 KTTH in the Pacific Northwest, reveals that officials at the University of Washington Medical Center have dropped a heart-transplant patient from their wait list – because he declined the experimental COVID vaccines.

And now, Rantz reported, the hospital isn't talking about its policy – and won't even admit it has one.

Rantz said he learned this week UW Medicine has removed a 64-year-old patient who had been on the list for two and a half years from the list entirely.

That would mean that should a transplant organ become available, it would go to someone who likely had waited less time, and the 64-year-old's life would be in higher danger.

The report explained, "The hospital made the decision after they learned the patient refused to be vaccinated against COVID. They said they would consider adding him back to the waitlist should he satisfy their 'compliance concerns.'"

Another "vaccine-hesitant" patient also reported, Rantz said, "he was told the vaccine was mandatory before he could get a necessary liver transplant."

"The hospital does not deny any of the allegations," he reported.

Rantz explained the practice apparently dates back to June, when "Sam Allen of Monroe learned that his heart transplant surgery was on the line over his refusal to get the COVID vaccine."

Should patients be removed from organ-transplant waitlists if they refuse to get a COVID vaccine?
1% (2 Votes)
99% (137 Votes)

All that makes it difficult to breathe, which is why he wouldn't mask up, after which his doctor called.

"The cardiologist called me and we had a discussion, and he informed me that, 'well, you’re going to have to get a vaccination to get a transplant.' And I said, 'well that’s news to me. And nobody’s ever told me that before.' And he says, 'yeah, that’s our policy,'" Allen said.

Shortly after, he got a letter informing him he was dropped from the United Network for Organ Sharing wait list for a heart.

"Your name has been removed from the waitlist at the University of Washington Medical Center. This was done in follow-up to your recent conversation with providers regarding the heart transplant selection committee’s concerns about compliance with COVID-19-related policies and recommendations," the letter said.

Allen responded with his concern about side effects, as well as the "lack of scientific logic" in the policy.

For instance, he, a patient with huge heart problems, is being told to take a vaccine that "has shown to cause cardiac problems."

Hospital spokeswoman Susan Gregg first told Rantz the vaccinations were "recommended." Then she changed, and said the decision is based on "risk factors."

Rantz pointed out that the hospital declined to offer further information, and concluded its commitment to patients "only applies to the patients who will receive a vaccine."

He speculated, "Perhaps the lack of clarity is due to the medical ethics of withholding potentially life-saving surgery from patients expressing some level of bodily and medical autonomy? Maybe it’s unwise to establish a policy on a vaccine that hasn’t yet been given full approval from the U.S. Food and Drug Administration. Are there legal ramifications for that?"