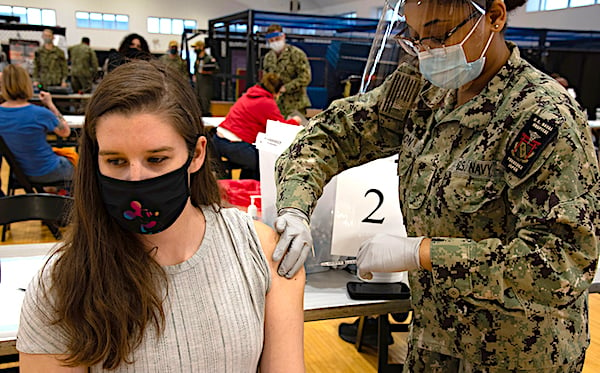 The U.S. Food and Drug Administration has approved the Pfizer COVID-19 vaccine for general delivery to adults in the United States – a step up from the "experimental" designation it had held for the months it already has been given to people.

But that doesn't mean it's "safe," according to a detailed report from Liberty Counsel, a legal team that specializes in religious and human rights cases.

The organization cited the national VAERS data, a compilation of cases involving negative results and reactions from medications, and those show "595,620 adverse events, including 13,608 deaths as of August 13, 2021, from the COVID injections."

"The deaths in this data includes approximately 3,079 deaths after receiving the Pfizer shot. Regulators also said they determined there are increased risks of myocarditis and pericarditis, or heart inflammation, following administration of the shot, particularly within the seven days following the second dose of the two-dose regimen," the organization, which is active in fighting corporate demands that workers and others accept the unusual shots, said.

It noted the warnings included on the Pfizer injection state: "The observed risk is higher among males under 40 years of age compared to females and older males. The observed risk is highest in males 12 through 17 years of age. Available data from short-term follow-up suggest that most individuals have had resolution of symptoms. However, some individuals required intensive care support. Information is not yet available about potential long-term health outcomes."

The report noted the "history" of the Pfizer brand, which in 2009 was involved in a case, with its subsidiary Pharmacia & Upjohn Company Inc., in paying $2.3 billion in the largest health care fraud settlement in history against a pharmaceutical company, Liberty Counsel explained.

Back then, Pfizer pled guilty to a felony violation of the Food, Drug and Cosmetic Act for illegally promoting the uses of four of its drugs, including the anti-inflammatory drug Bextra; Geodon, an antipsychotic; Zyvox, an antibiotic; and Lyrica, an anti-epileptic drug.

Liberty Counsel also provided a list of other drugs that have been "approved" by the FDA, but still caused problems.

For example, Seldane was approved in 1985 but was recalled because of life-threatening heart problems when taken in combination with other drugs.

And "Ranitidine was sold under the familiar name Zantac (among other names) which is a medication that was used to treat stomach acid. It was found to break down into N-nitrosodimethylamine (NDMA) which is known to be highly hepatotoxic (chemical driven liver cancer) and is a known carcinogen in laboratory animals."

Also, "A popular opioid pain reliever Darvon & Darvocet (Propoxyphene) was put on the market in 1955 and continued to be on the market for 55 years (2010) until it was found that it was causing serious toxicity to the heart."

Accutane had been on the market for 27 years before being pulled in 2009 for being linked to an increase risk of birth defects, the report said.

"Expediting an experimental injection in months without years of clinical studies and testing is irresponsible and deadly. The FDA has a terrible track record approving drugs that had to recalled and removed from the market. I fear this unsound rush to approve the Pfizer two-shot dosage will be added to the FDA long list of failed and harmful drugs. Notwithstanding this FDA approval, people may still claim medical and religious exemptions," explained Mat Staver, Liberty Counsel's chief.