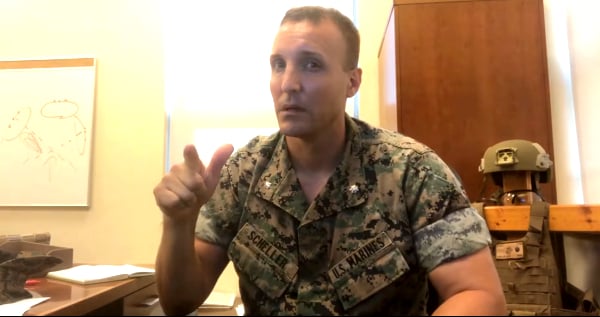 A sitting Marine battalion commander was fired Friday after he slammed the "ineptitude" of U.S. military leadership over the disastrous Afghanistan withdrawal.

Lt. Col. Stuart Scheller said in a video posted on YouTube after the deadly suicide attack Thursday that he was willing to risk his career and his pension -- only three years from retirement -- to "demand accountability" from top military brass, the Washington Free Beacon reported.

"I want to say this very strongly. I have been fighting for 17 years. I am willing to throw it all away to say to my senior leaders: I demand accountability," said Scheller.

In a Facebook post Friday, he announced he had been "relieved for caused based on a lack of trust and confidence."

In his video, he said he had a close relationship with one of the 13 service members who were killed Thursday in a suicide bombing at a gate at the Hamid Karzai International Airport.

He said he is not the only service member who is upset about how the withdrawal has been handled.

"The reason people are so upset on social media right now is not because the Marine on the battlefield let someone down. That service member always rose to the occasion and done extraordinary things," Scheller said. "People are upset because their senior leaders let them down and none of them are raising their hands and accepting accountability or saying, ‘We messed this up.'"

Scheller, the Free Beacon reported, reacted to an Aug. 18 public letter by Gen. David Berger, commandant of the Marine Corps. Berger attempted to reassure Marines who were expressing their frustration on social media that their service was "meaningful, powerful, and important."

Should this Marine commander have been fired for blasting the military's leadership?
2% (49 Votes)
98% (2083 Votes)

Scheller said the letter missed the point, arguing the withdrawal was a major policy failure from the highest levels of military leadership.

He called out Secretary of Defense Lloyd Austin and the joint chiefs of staff.

"I'm not saying we've got to be in Afghanistan forever. But I am saying, did any of you throw your rank on the table and say, ‘Hey, it's a bad idea to evacuate Bagram Airfield, a strategic airbase, before we evacuate everyone'? Did anyone do that? And when you didn't think to do that, did anyone raise their hand and say, ‘We completely messed this up'?" asked Scheller.

Scheller said he counted the cost of posting the video.

"I thought through, if I post this video, what might happen to me — especially if the video picks up traction, if I have the courage to post it," Scheller said.

"But I think what you believe in can only be defined by what you're willing to risk. If I'm willing to risk my current battalion seat, my retirement, my family's stability to say some of the things I want to say, I think it gives me some moral high ground to demand the same honesty, integrity and accountability from my senior leaders."