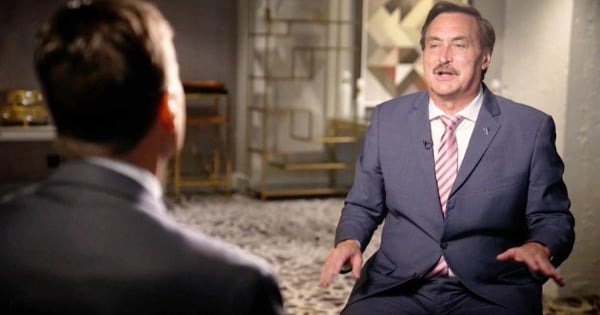 On the second day of his three-day cyber symposium promising evidence that China hacked the 2020 election, MyPillow CEO Mike Lindell got a boost from former President Donald Trump.

Trump on Wednesday joined Lindell in chastising Fox News for not covering his event, which began Tuesday morning, the Washington Times reported from the site of the event in Sioux Falls, South Dakota.

"Fox doesn't understand that it is missing a rating bonanza by not covering the 2020 Election Fraud, the Crime of the Century, which is being exposed throughout many states on a daily basis," Trump said Wednesday in a statement. "They are also doing a disservice to our Country. People have turned them off!"

Lindell has stated, however, that Trump has no involvement in the symposium.

He promises, before the event ends Thursday, to present 37 terabytes of "irrefutable" evidence that hackers backed by China switched votes in favor of President Biden.

The event is being livestreamed on Lindell's FrankSpeech.com website.

After Fox News refused to advertise the symposium last month, Lindell pulled ads valued at more than $1 million per week from the network.

On Tuesday, Lindell said it's "disgusting" that Fox hasn't "talked about this election."

"At least we know where CNN and all these terrible outlets come from. At least they attacked, and then we can at least get the word out," he said.

On Wednesday, Lindell asked: "Where's Fox? Today Fox should be livestreaming this."

Lindell believes his evidence will be so convincing that it will result in a unanimous Supreme Court ruling to overturn the November election.

"Whether you’re a Democrat or Republican, this will be the greatest uniting of our country ever," he told the Washington Times in an interview. "Because this isn't about politics. This is about free and fair elections and about the 2020 [election]. And you’ve got to get that righted."

The Minnesota entrepreneur has spent about $15 million on election-fraud investigations and the cyber symposium. But the toll on his company has been much higher, with hundreds of millions of dollars in losses as retailers have pulled his products.

Some 500 people registered for the symposium, including politicians or their delegates from 49 states.

He has offered $5 million to anyone in attendance who can disprove his claims.

Lindell said a number of people came to him in early January saying they had recorded "packet captures" in real time on Election Day. He then hired a team of experts, who spent months validating the material and organizing evidence.

CNN reported last week that election officials in more than a dozen counties that Lindell has claimed were hacking targets said their voting machines are not connected to the internet. They also insisted the results are confirmed by paper ballots, and in some instances official reviews have verified their counts.

'Everyone in the world is going to be curious'

Lindell said his symposium will be "the most seen event in history."

"I believe that because everyone in the world is going to be curious and to see this," he said. "And they're going to be talking, going, 'You got to see this. This is real. The United States was, their election was taken, hacked into by China.'"

Lindell already has produced several documentaries presenting his claims, including "Absolute 9-0," a reference to a unanimous Supreme Court ruling.

As a consequence of his campaign, several retailers have stopped selling MyPillow products. And in February, one of the largest manufacturers of voting machines, Dominion Voting Systems, sued Lindell and MyPillow for $1.3 billion in damages for defamation.

Lindell responded with a countersuit for $1.6 billion claiming Dominion had infringed on his right to free speech.

Last month, Lindell pulled ads amounting to $1 million per week from one of his biggest promoters, Fox News, because the network refused to run an ad for the cyber symposium.

Lindell said his effort is all about perserving America and he's willing to literally sacrifice his fortune.

"Even if I went down and lost everything and was penniless in the street, it wouldn’t matter," he said. "This is it. It doesn't matter about the money."

IMPORTANT NOTE: From rampant voter fraud, to Google inducing 6 million "undecided" voters to support Joe Biden, to social media and news organizations and the "deep state" working together to suppress damning revelations about Biden family corruption just before the election, to the Democrat-Media Complex's underlying message that election fraud is not just morally permissible, but morally ESSENTIAL, because "Trump is another Hitler," the latest issue of Whistleblower magazine presents a powerful and groundbreaking case that the November 2020 presidential election was the most corrupt in generations. The issue is titled "YES, THE 2020 ELECTION WAS STOLEN: How Big Tech, Big Media, lying Democrats, deep staters and vote fraudsters cheated Trump – and America."

"YES, THE 2020 ELECTION WAS STOLEN" is available both in Whistleblower's much-loved print edition and in state-of-the-art digital form. Better yet, SUBSCRIBE TO WHISTLEBLOWER (print edition) and get 12 powerful issues plus three free gifts, or else get an ANNUAL DIGITAL SUBSCRIPTION.