Afghanistan, the border crisis, inflation, China, Joe Biden – there are a lot of things to worry about these days. We have our hands full, for sure.

A day does not go by that America doesn't see things getting more out of control. There's no legitimate leadership; every day there seems to be a new national emergency; and there's so much division in our country. Why? What is the No. 1 existential national crisis America faces?

I would say it's two-fold: We need free and fair elections to be conducted under the rules of the Constitution, and we need the First Amendment to be taken seriously once again.

These two things need to go hand in hand. That is THE CRISIS!

Everything could be resolved if we solved these two problems in quick succession. But the longer these problems stand in our way, the more it becomes doubtful we can ever escape this madness.

Republicans and independent voters agree on this.

However, Democrats think the survival of America depends on widespread censorship by the most massive, monopolistic communication distribution platforms in the world, and they don't recognize that the last election was decided by fraud.

How do we resolve this?

Big Tech is eager to repeal, effectively, freedom of speech, freedom of the press and freedom of religion as a means of reaching its goals. It's that simple. That's what would happen if we followed the current path Google, YouTube, Facebook, Twitter, Apple and Amazon are on.

If we allow that, free speech, press and religion, as well as free and fair elections will never return to this land.

Recent polls show there's no longer a consensus among the dumbed-down American public regarding the precious right to freedom of expression.

Again, I look at this combination of toxic developments and see this threat to our most cherished liberties as America's No. 1 national crisis.

The censorship to date and catcalls for even more are so overt, so abundant and so open, that it prompted Nadine Strossen, president of the American Civil Liberties Union for 17 years, to recently say: "Everybody uses the epithet 'hate speech' for any idea that they hate. If that becomes the standard for what we're going to hear and what we're not going to hear, we're not going to hear anything at all. Given the wonderful diversity of ideas in this society, one person's hate speech is another person's beloved speech."

Add to this mix the fact that the Google, YouTube, Facebook, Twitter, Apple and Amazon cabal all share such a strident leftist ideology that every one of them has chosen the crypto-fascist Southern Poverty Law Center as their go-to source for defining "hate speech," individual "haters" and "hate groups." There's zero neutrality and zero diversity (of viewpoint) at work within this cartel. There is no non-partisanship. No objectivity. No fairness. No respect for the views of others. No love for ideological diversity. No tolerance of dissent from its worldview.

What does this mean for me, for the independent media, for conservatives, for Christians, for anyone who deviates from the most powerful communications cartel ever developed? It's a recipe for virulent persecution.

I've seen this coming for a long time.

But it has gotten much, much worse since the 2016 presidential election – and I cannot emphasize that point strongly enough.

It wasn't just Hillary Clinton who was shocked by the election results that year. It wasn't just CNN, MSNBC, the New York Times and the Washington Post. So were the Big Six digital mega-corporations that now control the flow of news, ideas, opinions and information on the internet. That's when they got serious about using their clout, effectively declaring war on the independent media, conservatives and Republicans and anyone else they blamed for the 2016 election results. For WND and other independent media, it has meant staggering attacks on traffic and advertising revenue. It's worth noting that Google and Facebook alone control 80% of the digital advertising marketplace.

It's clear they are trying to destroy us.

I've been calling attention to all this openly since January 2018 – having no other place to turn for help but to our most loyal audience developed over the last 25 years.

We need to stop this cabal dead in its tracks. We need to preserve our nation's precious First Amendment freedoms. But it won't be easy. We're fighting right now for our nation's very survival – like never before.

We will need a warrior leader, like President Donald Trump, elected in 2024 before we have a chance to solve THE CRISIS that has engulfed America and made it the laughingstock of the world.

And to get that requires election integrity and an overpowering rebuke of the Democrats in 2022. 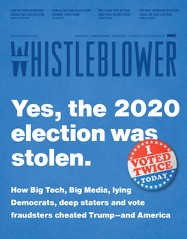 For a limited time, subscribe to Whistleblower, renew or give a gift subscription and you'll get $10 off the already discounted rate (pay only $39.95 instead of the usual $49.95), plus you'll get three very special free gifts:

First, you'll get a state-of-the-art digital version of one Whistleblower's most popular and important issues ever – "ENDING THE PANDEMIC: How vaccine mania and lust for power led to the all-out suppression of proven safe-and-effective COVID treatments."

Second, you'll get the digital edition of "BIDEN'S WAR ON THE MILITARY: How America's 'woke' rulers are subverting the world's best and noblest fighting force."

Finally, you'll get the digital edition of "TRIBULATION AND REDEMPTION IN AMERICA: How today's breathtakingly corrupt politics and culture invite personal and national recovery."

Subscribing to Whistleblower is one of the very best ways to support WND, under brutal ongoing assault by Big Tech and others, and at the same time to get one of the best, deepest, and most genuinely helpful real-news sources available today. GET WHISTLEBLOWER NOW.