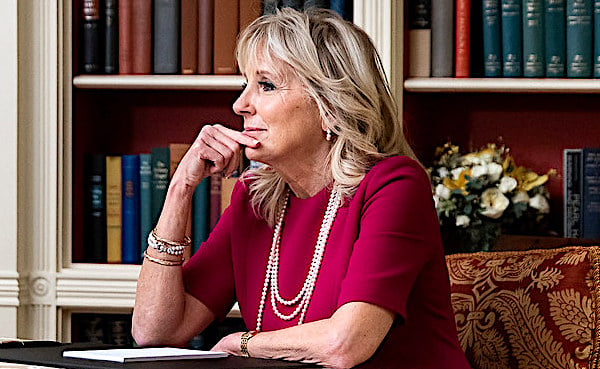 First Lady Jill Biden holds a virtual event to honor the work of educators Thursday, Jan. 21, 2021, in the Library of the White House. This is the first lady's first event of the Biden administration. (Official White House photo by Chandler West)

Only days after allegations surfaced that Kamala Harris, as vice president, runs a dysfunctional office, treating her staff poorly and forcing them to work in a "blame culture," similar charges have been leveled against a staff member in First Lady Jill Biden's extensive support team.

A report from Politico charged in its headline that "Jill's enforcer has a mean streak."

The report identifies Anthony Bernal as the "most powerful person in the First Lady's office," meaning that, since she's important in advising President Biden, he holds significant influence.

He is an "adviser" but the planning for nearly every event for Jill Biden goes through him, the report said, and "the way he has wielded that power has made Bernal one of the most polarizing people in the White House."

The conclusion was based on interviews with dozens of White House employees and others.

Many officials, unidentified in the report, "argue that Bernal's pursuit of perfection on behalf of the First Lady does not excuse the way he treats some other staffers. Many described him as 'berating' and 'toxic' because of his unfiltered criticism of others and tendency to trash talk his colleagues behind their backs."

"Anthony's loyalty to our team and the First Family is unrivaled, and he holds himself, and all of us, to the highest standards," countered Julissa Reynoso, chief of staff for Jill Biden.

"There is no one at the White House with a bigger heart than Anthony, which is one of several reasons why so many in the First Lady's office have worked with him for years. He cares deeply about the personal and professional growth of his colleagues."

But others explain that "everyone" knows "someone who has been on the receiving end" of his tantrums.

"Two former campaign staffers said they heard Bernal call people 'stupid' in meetings or over the phone. During the campaign and in the White House, some staffers felt the behavior was so noxious that they began surreptitiously recording him in meetings, according to two officials who others confided in about recording him."

Another anonymous complaint was: "He has a constituency of one and he’s very effective on her behalf. The problem is that no one who has worked with him trusts him, and that’s not good for him or her."

A former White House official who shared job responsibilities with Bernal said, "Even if you’re his friend, you know he’ll talk s--- about you."

The report noted Bernal is at "maximum salary."

The White House didn't make Bernal or Jill Biden available for the report.

The Sun reported, "White House Press Secretary Jen Psaki was pushed to comment on the allegations on Tuesday but claimed they were 'hard to look into' as they were made anonymously."

Earlier, Politico reported, "There is dysfunction inside the VP’s office, aides and administration officials say. And it's emanating from the top."

The report said Harris' decision to visit the Mexican border – more than three months after she was given the responsibility for the crisis by President Biden – left her office staff members "blindsided."

"While much of the ire is aimed at Harris’ chief, two administration officials said the VP herself also bears responsibility for the way her office is run," Politico found.

A Breitbart report noted Harris, whose approval rating has been falling as she's failed to deliver on any of the agenda points Biden has given her, is getting frustrated with the media because she thinks her "depth and thought" are being ignored.

"Part of my frustration is the way that this system rewards sound bites" as opposed to "depth and thought," Harris complained to Atlantic reporter Peter Nicholas.

The report noted Harris was "fed up" with media portrayal of her job, and it explained, "Harris and her team have stumbled in the first six months of office, careening from crisis to crisis with painfully awkward moments."