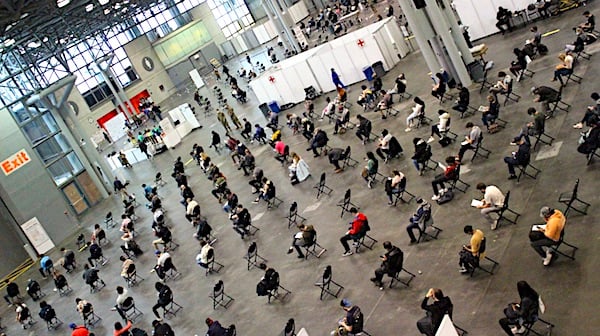 The federal government likely hasn't run an advocacy campaign like its current pro-COVID-19 vaccination messaging in decades. It's joined by most state governments as well as industry, Big Tech, education, business and travel interests.

Get your COVID shot, consumers are told, warned and even threatened, even though the benefits are subject to question and the side effects have put thousands in hospitals, or their graves.

But a surging number of Americans are simply rejecting the messaging as not true.

Mat Staver, founder of Liberty Counsel, runs one of the legal teams that, across the country, now are facing a nonstop barrage of telephone and email requests for help fighting demands that students and employees take the experimental shots.

He confirmed in a recent email message that his organization has received more than 10,000 requests from people "desperate to escape the shot mandates."

His organization filed a lawsuit against Maine already, where officials simply decided no one was allowed to have a religious belief opposing vaccinations, including the COVID-19 shots that were developed with the use of cell lines from aborted infants.

The state-turned-church apparatus said simply no one could claim to have a belief against its shot requirements.

Reports predicted "many more legal battles" over that issue.

In fact, Staver reported that some of those individuals among the more than 10,000 requests for help have, individually, represented "thousands" of people threatened by the mandates.

"Mandatory injection requirements may begin with COVID, but they will not end there," he warned. "The CDC is already recommending booster shots."

The result is that students have been expelled from schools, to which they'd already paid tuition and fees, workers are unemployed and many, many are facing the untenable choice of giving up their religious convictions or getting fired.

Staver's organization, too, is just one of dozens that are responding to individuals horrified by the prospect of submitting to a "treatment" plan that may kill them.

Staver said the pleas for help "are breaking my heart."

"One husband called and broke down in tears: 'My wife will be fired on Monday. She is part of more than 50 medical workers in a nursing home who declined the jab. They are being forced to sign that they 'voluntarily' quit so they can’t get unemployment benefits. Do we have to?'" Staver explained.

He cited a testimonial from a "healthy Virginia woman."

She wrote, "As soon as I received the vaccine, I immediately felt shooting pains in my right eye and noticed red blood vessels had busted on my eyeball, and I began experiencing light and sound sensitivity as well as a strong sense of smell. The next day I woke up to horrible acid reflux, nausea, diarrhea, stomach cramps and stabbing stomach pains as well as neck pains and throbbing in the back left side of my head.

"I then developed insomnia, anxiety, nerve pains and vomiting as well as a metal taste in my mouth and sore, swollen tongue. I also began having muscle spasms in my legs. The diarrhea, which lasted 6 weeks, caused a large amount of weight loss (eventually totaling 72 pounds). When the diarrhea subsided, the shooting neuropathy in my legs, arms and torso began. After about 7 weeks, my eyes began to start having shooting pains and my vision was affected."

Now, he explained she reports having "tremors in the occipital region of my head when laying down, as well as body shaking and muscle and joint pains. I have also had memory issues and brain fog as well as ear popping. I then developed bulging veins on my feet, hands, neck and face."

Some of the actions so far against those who want to retain America's liberty and control over their own health care have been largely overlooked in legacy media.

For example, Democrats in Connecticut adopted a bill that would end the state's religious exemption for vaccinations for all students.

In some cases, exemptions have been granted, then revoked.

Such was one situation involving a student at Rensselar Polytechnic Institute which granted a religious exemption, accepted payment from an incoming student, then simply said the exemption no longer applied.

Liberty Counsel has filed a complaint with the New York Division of Human Rights over that stunt.

The student, who holds sincere religious belief that prohibit her from taking the COVID shot, was told the school decided there were too many people requesting religious exemptions so they simply picked an arbitrary cutoff date to cancel that option.

The problem for the school, Liberty Counsel explained, is "the Equal Protection Clause of the New York State Constitution explicitly states that it is unlawful discriminatory practice for an educational institution to deny the use of its facilities to any person otherwise qualified, or to permit the harassment of any student or applicant, by reason of his race, color, religion, disability, national origin, sexual orientation, gender identity or expression, military status, sex, age or marital status…"

Further backing those challenging the requirement is the fact the current vaccines are being used under an emergency authorization ruling, meaning they continue to be considered experimental.

"That means people must be told the risks and benefits, and they have the right to decline a medication that is not fully licensed. All of the COVID-19 shots (Pfizer/BioNTech, Moderna, Johnson & Johnson) have received only EAU authorization and not full FDA approval," Liberty Counsel noted.

The one shot that had been given Food and Drug Administration approval is called Comirnaty, from Pfizer and BioNTech, but it is not yet available. The Pfizer shots now being used remain experimental.

Walt Disney and Walmart are among the major companies that have told some or all of their employees that they must get fully vaccinated against COVID-19 this fall. The Pentagon will require vaccinations for service members no later than Sept. 15, or sooner if the FDA grants full approval earlier. The Department of Veterans Affairs will require nearly every worker, volunteer and contractor within its vast health care system to be vaccinated, the New York Times reported.

Some 50 health-care professional societies and organizations in the United States have urged all health-care employers to require their employees to be vaccinated against COVID-19.

Recently, Oregon Democratic Gov. Kate Brown announced all health care workers in the state must be vaccinated. There is no alternative.

In Washington state, Gov. Jay Inslee has inserted a "gotcha" question for those filing for exemptions.

The state's "guidance" for public school faculty and staff members who seek a religious exemption to the vaccine mandates includes several questions.

The first, "You assert that you have a sincerely held religious belief or religious conviction that prevents you from receiving the COVID-19 vaccine … Yes or no?"

"You affirm/agree that you have never received a vaccine or medicine from a health care provider as an adult. Yes or no?"

KOMO News explained Inslee claimed, "The purpose of this question is to understand whether there was a history of declining medical treatment or vaccination based on an applicant's religious belief."

Inslee said, "If they answer no, the HR professionals would engage in follow up questions to better understand the person's history, such as demonstrating changes they have made as an adult based on those beliefs."

The danger would be twofold, the report suggested, in that it equates any "medicine" obtained from a "health care provider" with the abortion-linked COVID vaccines.

Further, it would open the door for a government official to express his or her opinion on a religious belief.

Explained Liberty Daily, "This question will act as a hindrance for some. Those who have received past vaccines such as their flu shots will have the moral dilemma of whether they should lie in order to get their exemption. If they don’t, will that disqualify them? Probably not, but they will be put through indoctrination with their 'HR professionals' who will try to convince them to take the jab.

"It’s ugly politics. Nothing more. Jay Inslee and his fellow vaccine-pushers want no excuses for why people aren’t getting vaxxed. They want as many jabs in as many arms as possible, moral values and medical science be damned."

KOMO reported there was a reaction from state Sen. Doug Ericksen, R-Linden.

"I think what you're seeing here is a system that the governor has intentionally put out to make it as difficult as possible for someone to qualify under this exemption that he's put out there," he said.

"So, it's pretty disingenuous to say you're going to have a religious exemption and then place so many caveats and so many rules and restrictions on it that it makes it almost impossible for somebody to use honestly."

The fight covers many categories of people. Just this week, a federal judge in Michigan granted a temporary restraining order protecting the rights of four soccer team athletes at Western Michigan University who had been threatened with ejection for refusing the vaccines.

The Great Lakes Justice Center was working on that case. The judge said, "Plaintiffs have established a likelihood of success on their claim that WMU’s denial of a religious exemption from vaccine requirement for its student athletes violates Plaintiffs’ right to the free exercise of religion. Defendants are enjoined from enforcing a COVID-19 vaccine requirement against Plaintiffs. Defendants may not prevent Plaintiffs from participating in team activities for the reason that Plaintiffs have not received a COVID-19 vaccine."

Bob Unruh
Bob Unruh joined WND in 2006 after nearly three decades with the Associated Press, as well as several Upper Midwest newspapers, where he covered everything from legislative battles and sports to tornadoes and homicidal survivalists. He is also a photographer whose scenic work has been used commercially.
Veteran complains about gov't incompetence, officials suggest she DIE
Lawsuit challenges election favoritism by Wisconsin city
Poll: Do voters even like Elon Musk's shakeup at Twitter?
Major U.S. city gets serious warning for using killer robots
Restaurant refuses to serve customers BECAUSE they're pro-life, pro-family
See more...