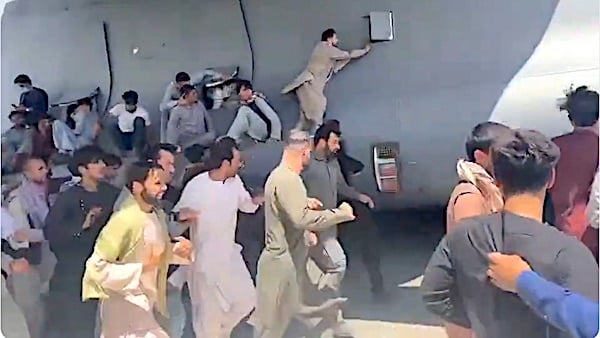 The Taliban’s seizure of Kabul on Sunday prompted large crowds of people to head to Hamid Karzai International Airport in hopes of escaping the city with evacuating Americans as the U.S. completes its withdrawal from Afghanistan. The U.S. sent troops Sunday to secure the airport and facilitate the evacuation of American and allied personnel.

U.S. forces repeatedly fired into the air and helicopters dropped smoke grenades in an effort to disperse the crowd, according to The Wall Street Journal. People were hanging on to boarding ramps and crowding around parked planes in an effort to escape the city.

Evacuation flights from the airport in Kabul were suspended Monday morning due to the crowds, Fox News reported.

At least five people have been killed during the chaos at the airport, Reuters reported, though their cause of death is unclear. One witness told Reuters a stampede occurred that may have caused injury or death.

The scene outside the Kabul airport gate this morning, where people were arriving by the thousands and things were rapidly spiraling out of control, as false rumors spread of flights out for anybody without visas. Several killed inside and outside already. pic.twitter.com/Rzdi2D9BTe

Taliban spokesman Suhail Shaheen told the BBC that troops were under strict orders not to harm anyone, and that the militants desired a “peaceful transfer of power.”

Ashraf Ghani, president of Afghanistan, fled the country to Uzbekistan early Sunday, reportedly bringing with him four cars and a helicopter full of cash, a Russian embassy spokesman told Reuters.