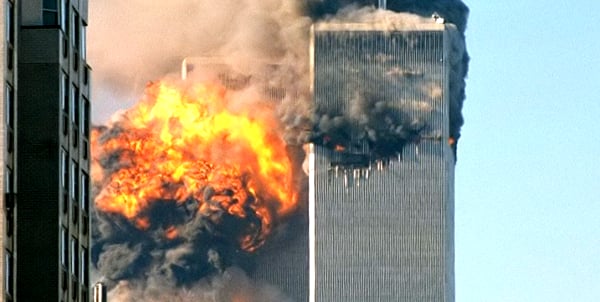 The northeast face of Two World Trade Center (south tower) after being struck by plane in the south face.(Wikimedia Commons)

As the 20th anniversary of 9/11 approaches, teachers in Virginia schools are being instructed to avoid connecting the attacks to Islam and instead focus on "anti-Muslim racism."

The state's Department of Education hosted a speaker described as an "education leadership scholar" who alleged that anti-Muslim sentiment rises around the anniversary of the attacks targeting the nation's political, military and economic centers that killed nearly 3,000 people.

"This year's 20th anniversary commemorations will likely result in heightened risks of racist discourse, threats, and violence targeting Muslim students in schools and society," it states. "Educators are well-positioned to disrupt these risks by centering the socio-emotional needs of Muslims in their commemoration plans."

DeCuir presented a list of teaching standards that are "in" and "out."

"In" is "acknowledgment of anti-Muslim racism."

"Out," among others things, are the "false assumption of Muslim responsibility for 9/11" and "American exceptionalism."

She said examples of "harmful teaching" on 9/11 include "reducing 9/11 instruction to death counts and fear mongering," "teaching about Islam and/or Muslims" and "amplifying the extremists and extremist acts of 9/11."

DeCuir also insisted teachers should not be "demanding the condemnation of 9/11" or "reproducing a single, American narrative that marginalizes other students."

The Daily Wire noted DeCuir's bio from American University describes her as an education scholar who "focuses on the intersections of leadership, gender, and diverse cultural contexts to advance social justice."

On Twitter, she called on "antiracist" educators to help "disrupt" the current education of 9/11.

“I lived through 9/11," he said. " ... This one event was due to Muslim extremists and their actions, the desire of these individuals to kill as many Americans as possible at one time. Why do we need to change history, again? Just tell the facts,” Newman said.

The lawmaker said children must be taught "the awful truth about the events of that day, and the evil intent behind the terrorists."